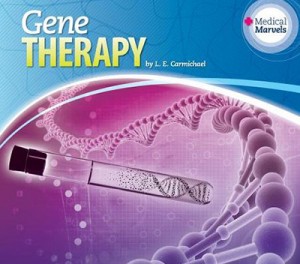 Muscular dystrophy, hemophilia, Leber congenital amaurosis (LCA), cancer… they all have one thing in common. They are genetic diseases, ultimately caused by missing or malfunctioning genes in the patient’s DNA. Until recently, we could treat the symptoms of many genetic diseases, but not the causes. There was no way to reach inside a person’s genes and repair the faulty code that started the whole problem.

Research into gene therapy aims to change that.

What is gene therapy?

Genes are blueprints for proteins. A complete set of working proteins makes a working human. In contrast, missing or malfunctioning proteins sometimes lead to disease. Many genes and proteins have to be affected to lead to diseases like cancer. Other diseases, like LCA and Lesch-Nyhan syndrome, result from a single broken gene.

The logic behind gene therapy is very simple: if a missing or malfunctioning gene is causing disease, a working copy of the gene could cure the patient. There are two ways to provide a working copy:

Once a working gene is present in the patient’s cells, his or her body can make a functional protein… and in some cases, that may be enough to cure the disease.

That Does Sound Simple… So Why Is Gene Therapy So Hard?

Lots of reasons, but we’re going to focus on two:

So How Do Scientists Solve These Problems?

Stay tuned! In Part 2, I will explain what CRISPR is and why scientists are so excited about it. In Part 3, we’ll tackle the “every cell” problem… and some awesome/scary breakthroughs that have recently hit the news.

In the meantime, you or your teenager might want to check out my YA science book, Gene Therapy. It’s a couple years old now, but is still a solid introduction to the history and science of this cutting edge medicine.

2 Comments on ‘Introduction to Gene Therapy: It Sounds Simple, But It’s Sure Not Easy’