THANK YOU to everyone who came out and partied on Twitter during International Day of Forests! You made social media more fun and less scary, and these days, that’s saying a lot. Special thanks to my special guest authors:

Carmen Oliver, author of A Voice for the Spirit Bears

Darren Lebeuf, author of My Forest is Green

And a huge shout out to Kids Can Press for providing our Day of Forests prize pack, which was won by Suzanne Del Rizzo!

And now on to today’s main event:

Here’s a sidebar that I’d originally planned to include on pages 20-21:

Iceland’s Lake Myvatn is famous—for flies! In summer, up to 50,000 fly larvae hide in every 1 m2 (1.2 y2) of lake bed. Many birds eat these larvae, as well as the adult flies. Fly bodies contain nitrogen, an important nutrient. Usually, nitrogen from land plants and animals ends up in water. At Lake Myvatn, it’s the opposite. 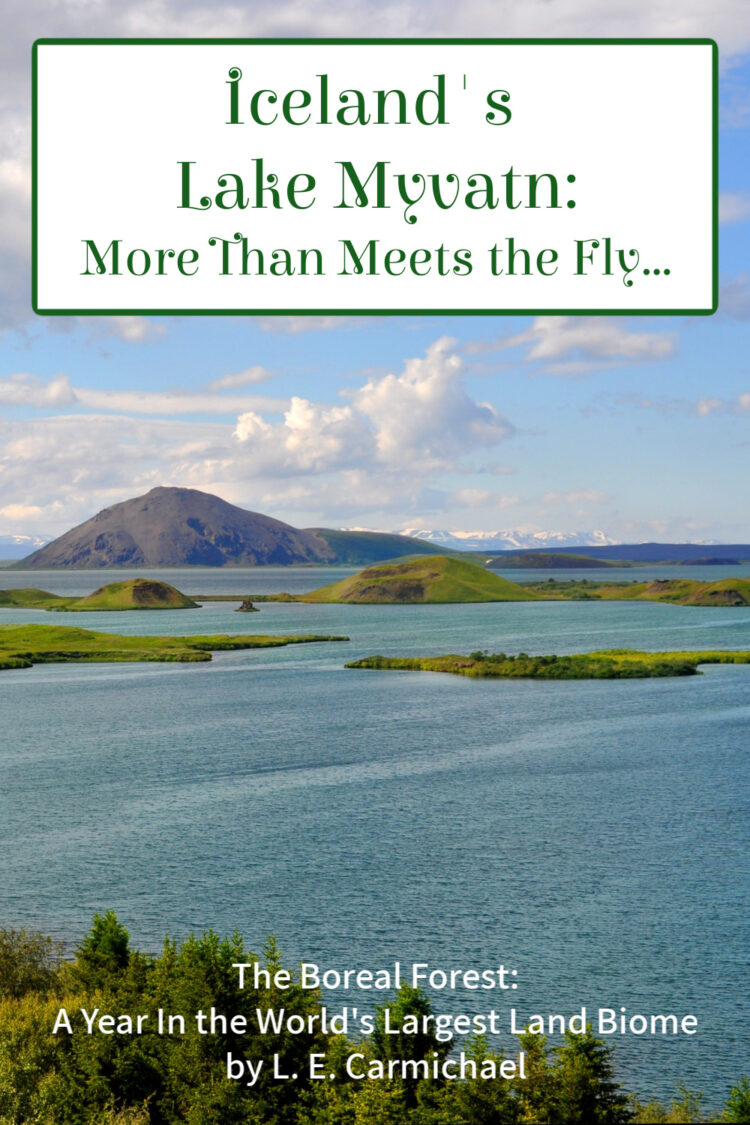 First of all, ew. Just thinking of that many insects gives me the wiggins, and if you’ve spent much time in the boreal forest (or the Arctic, for that matter), I bet you’re having a flashback right now, too. But let’s put the squeamish aside for a moment and take a closer look at the science here – the science of nutrient cycling.

Have you ever fertilized a garden? If so, you know that nitrogen is one of the main ingredients in fertilizer. That’s because plants can’t grow without it – in some cases, a lack of nitrogen prevents plants from growing even if they have sunshine and water and all the other things they need. When plants die, the nitrogen that was stored in their bodies breaks down and re-enters the soil, where it can be taken up and used by other plants. In the boreal forest, this process of decomposition is very, very slow, so nitrogen is a common limiting factor in the biome.

And just as the nitrogen in the fertilizer you use dissolves in water and runs downhill – often into the street – nitrogen in soil can be picked up by rainwater or snow melt and carried into nearby lakes and rivers.*

In contrast, movement of nitrogen from the water back into the soil is less common. One example you might have heard of is salmon runs – bears, eagles, and even wolves catch fish in the streams, then drag them into the forest to eat. When the leftover carcasses break down, they fertilize the trees. The same thing is happening in Iceland, through a slightly different pathway:

Hmm…. I’m just noticing how many words were in the original sidebar and how many ADDITIONAL words it took me to PROPERLY explain the process I was trying to explain. I think my editor was right to suggest cutting it!

This, among many, many other reasons, is why authors have editors in the first place. 🙂

Side note: if you’ve been to Iceland, you might have noticed that there aren’t a whole lot of trees. You can blame that on the Vikings and later settlers, who were responsible for cutting down most of the original forest when they colonized the island over 1000 years ago. For more info on what makes Iceland’s boreal forest unique, check out this kid-friendly website. It’s in English. 🙂

Have you been to Iceland? Did you explore the forests or bat away the bugs? I’d love to hear from you!

Hey look – the Boreal Forest Prize Pack now includes socks festooned with boreal animals! Did you know that commenting is one way to enter the Rafflecopter giveaway? And don’t forget to contact me if you have a copy of The Boreal Forest that needs an autographed bookplate.

* This can be a cause of eutrophication, where algaes and other water plants suddenly grow out of control and turn a nice, clear lake into a sludgy mess. One of my previous kid’s books, How Can We Reduce Agricultural Pollution, touches on this issue in more detail.