TV scientists have it so much easier than the ones working cases in the real world. They have unlimited budgets to buy all the shiniest new toys. They dress in designer clothes that never seem to get dirty, despite the fact that they’re tromping around crime scenes. That one guy working the lab has completely eliminated the backlog, because a DNA fingerprint takes 20 minutes. 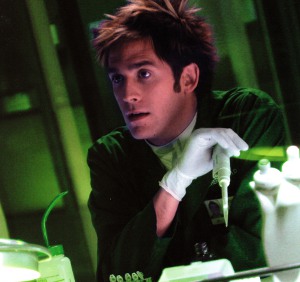 Greg was cooler before they let him out of the lab

As someone who constructed over 4000 DNA fingerprints during the course of my PhD, I can tell you with utter confidence that 20 minutes is horse feathers. A DNA fingerprint takes 2 days, assuming you’ve got nothing else to do when the samples arrive at your bench. Every time a TV forensic scientist drops off a sample in the DNA lab and says “I’ll wait for the results,” I wind up mainlining chocolate while shouting “I hope you brought a sleeping bag!”

Tech Support has the same problem when he spots discontinued defibrillators in the medical bay of the Starship Enterprise. 😀

Despite their wild inaccuracies, I still love forensic shows like Bones and Castle and CSI, although I firmly maintain that CSI should have ended when William Peterson (Gil Grissom) left the cast. My expertise gives me an advantage, though – I can tell when the shows are accurate and when they’re bending reality for the sake of poetic license. Viewers without my background aren’t always so lucky, leading to a thing called the CSI Effect – a jury’s belief that forensics actually works like it does on TV, and their demand for a complete suite of forensic evidence before deciding a suspect is guilty.

Not all lawyers and law enforcement personal believe the CSI Effect is a real thing. There’s a lot of anecdotal evidence for it, but it’s not easy to test scientifically. If it’s true though, these shows have managed not only to show criminals how to avoid getting caught, but made it harder to convict them once they are. Scary thought.

Want more? Here’s a fun article about things CSI gets right. And here’s a link to a study that compares conviction rates with inclusion of forensic evidence in the trial.

You can also check out my brand new book, Forensic Science: In Pursuit of Justice. It’s for ages 13+ and is available to order now.

What about you? Do you watch forensic shows? Is there another type of show whose inaccuracies make you crazy?