Jean Mills: When “Research” Means Mining Your Own Experience 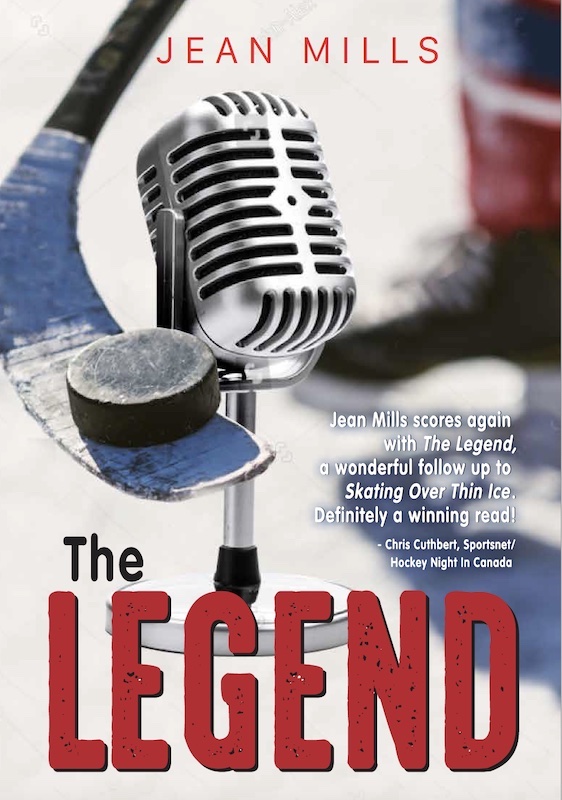 “Write what you know.”

Who said that? I’m not sure, but it’s a phrase – an instruction, really – thrown around as a guideline for writers. It suggests you should draw on what you know, mine your own life experience, and be careful leaping into the unknown – or at least no leaping without solid research.

Confession: I’m not enthusiastic about research. I can see my kidlit colleagues throwing their hands up in horror. Research is the fun part for many writers. I’ve heard writers say that research sometimes takes over and they have to force themselves to actually stop digging and get writing.

Not me. When I write a story, I tend to draw on a limited version of that “write what you know” approach, with a few dips into Google or questions thrown out to people with answers. After that, I just leap into the creative abyss and see where my characters take me.

So yes, I used some of my own musical background in the writing of SKATING OVER THIN ICE, a story about a musical prodigy. And yes, I used my little house on the shores of the Northumberland Strait as a starting point for LARKIN ON THE SHORE – but a whole lot of imagination (and leaping) went into the creation of both characters: Imogen, the confused and searching musician, and Larkin, the traumatized and struggling teen trying to find her way to healing. But neither of those characters is me.

And neither is Griffin, the injured hockey player in THE LEGEND, who gets a chance to work in sports media for a local radio station. But you know what IS “me”? Much of the sports media detail included in the story.

That’s because I spent ten years on the Media & Communications team for Curling Canada. I was there watching games from the media bench, interviewing athletes in the post-game scrums, sitting up late in cold arenas or lonely hotel rooms to submit game reports that would be used by other media outlets such as CBC Sports, SportsNet and TSN, not to mention outlets in the United States and around the world. And then there were photographs that needed to be selected, cropped, captioned and inserted into the website. And social media on three platforms (Facebook, Twitter and Instagram) that had to go out quickly during and after each draw, and links to videos of highlights and post-game scrums to be embedded and shared. All before shutting down for the night (somewhere around 2 a.m.) so I could get a few hours sleep before starting it all over again the next morning.

So in THE LEGEND, when Griffin shows up at the radio station for his interview and is asked to watch a video and write a radio news clip, I knew exactly what he needed to do (and he was a pro, naturally). From there, Griffin ventures into the world of sports media, with a mentor he’s not sure he can trust and some tricky situations along the way. I dug into my own past and, a few times, reached out to media colleagues to help fill in some gaps in order to create a realistic media landscape that readers would enjoy.

For example, Hockey Night In Canada announcer Chris Cuthbert (we were student broadcasters together at CFRC Queen’s Radio many years ago, but that’s another story…) sent me photos from the press box at the Canadian Tire Centre in Ottawa, and he shared some unexpected and colourful details that found their way into the story. Valuable research that enhanced the story.

So here are a few examples of the “write what you know” approach that found their way from my experience onto the pages of THE LEGEND: 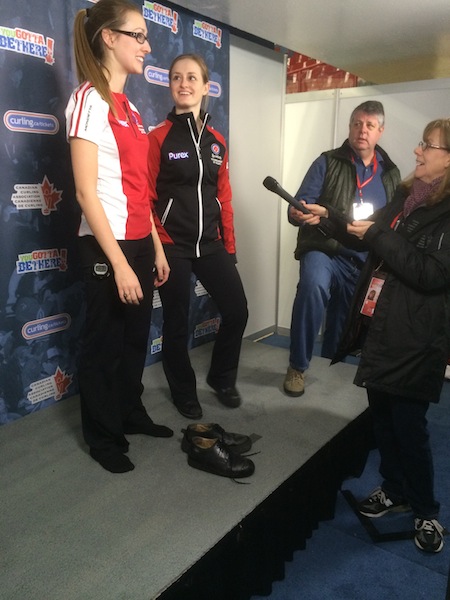 The Kreviazuk sisters, Ali (left) and Lynn (right) made interviewing fun, for once. Note the parka I’m wearing. Yes, it was parka weather inside the Maurice Richard Arena in Montreal.

I was always nervous interviewing athletes, and with good reason sometimes, especially if someone had just lost a big game. At the 2014 Olympic Trials, the Communications Director (my boss) instructed me to ask a fiercely intimidating male athlete a pointed and difficult question after a loss.

The athlete clearly didn’t like the question, but he answered well enough, and afterwards, my boss took us aside.

“I told Jean to ask you that question,” he said to the Fierce Curler (who was not happy with me.) “That’s the kind of tough question you’re going to get if you make it to the Olympics. Well done.”

A teaching moment for the athlete; a supportive “I’ve got your back, Jean” moment for me.

In THE LEGEND, Griffin attends a few post-game scrums to interview athletes and coaches. He’s nervous, but he pushes through and makes an impression. (And that’s all I’m going to say about that. *Spoiler*)

Sometimes it was just fun, though. Like the time I got to interview two sisters from opposing teams who had just played against each other.

As Griffin discovers in THE LEGEND, working alongside other media professionals is part of the job, and there are protocols to be followed. For instance, during my Curling Canada years, the host broadcaster of our events was TSN, and they had first dibs on access to athletes (especially on the ice), dibs on media bench space, as well as dibs on the selection of donuts provided by Tim Hortons every day. But they were still our colleagues. Working alongside sportswriters from other media outlets meant we all became colleagues as the grind of the competition went on for over a week.

I can state here that CBC Sports media star Devin Heroux saved me when I couldn’t get my phone camera to work (“Just clean it, Jean. Here, I’ll do it.”) And The Athletic’s (then National Post’s) Sean Fitz-Gerald kindly overlooked an unprofessional gaffe from this inexperienced reporter in the post-game scrum and took over the interview when I asked. I learned a lot from my colleagues on the media bench, and I made sure Griffin had his moments with media colleagues, too. 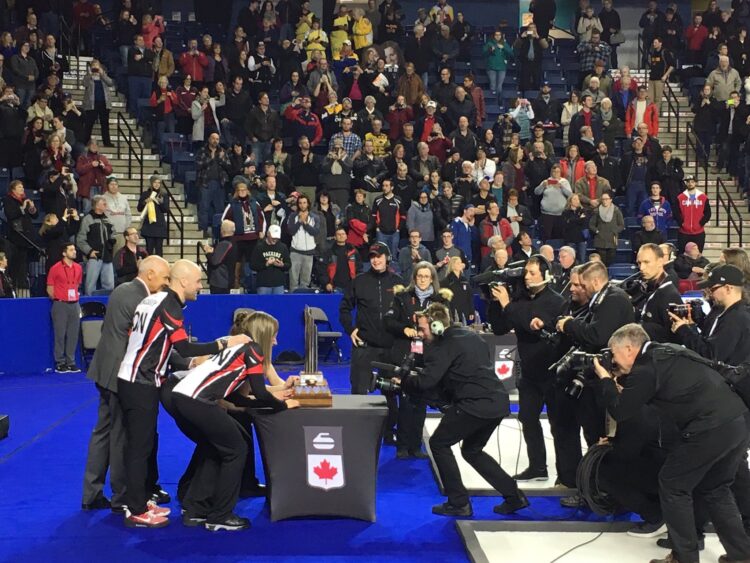 Game over, winners declared, trophy presented, and the national media moves in to get their shot. And that’s me, standing on the side with my phone, waiting for my turn to get a photo for social media. (Can you find me? There, in the middle of the photo, black jacket, holding my phone and waiting my turn. Photo credit: @Chris_Bittle on Twitter)

At various points in the story, Griffin is asked to do social media posts for the radio station, and I confess, this was one of the most fun parts of the job: looking for stories to share. Okay, sharing scores and updates was dull and necessary, but the best part was capturing moments on and off the ice. I was always on the lookout for stories that gave fans a different view of the event. It was all part of storytelling, and maybe explains why I stepped away from this job to focus on storytelling full time – writing fiction for teens, telling stories. 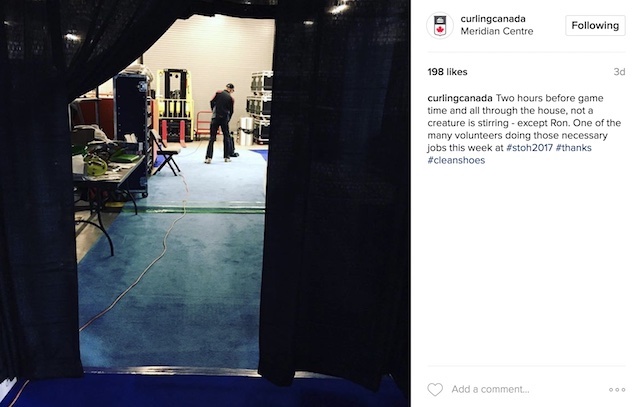 So much happens behind the scenes at a championship event. This was late at night, after the athletes and most of the media had left. I heard a noise and went to investigate. There was Ron, doing the thankless job that needs to be done, alone in a deserted arena.

When writing fiction, research is good, even essential, depending on what you’re writing. I think my own real-life experience contributed valuable insights to the the writing of THE LEGEND. So just maybe, sometimes, “write what you know” really is the best tool for a writer. It works for me. 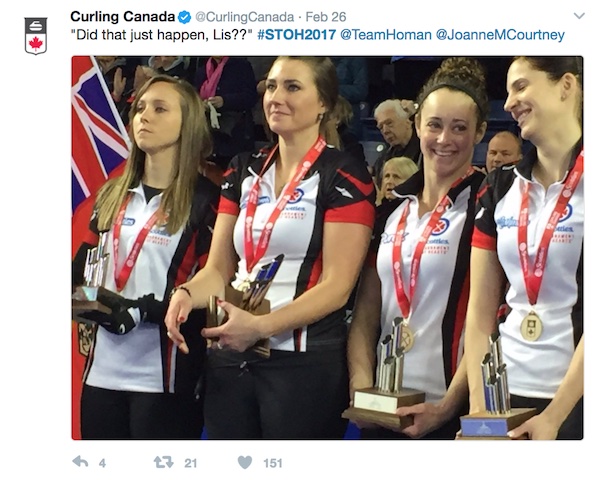 Canadian champions, after a nail-biter of a game that went to an extra end. Joanne was new to the team this season, her first national women’s title, and she was crying with excitement. I couldn’t resist framing the moment, just a little…

Jean Mills lives in Guelph, Ontario. Her third YA novel, THE LEGEND, was released November 15 by Red Deer Press.