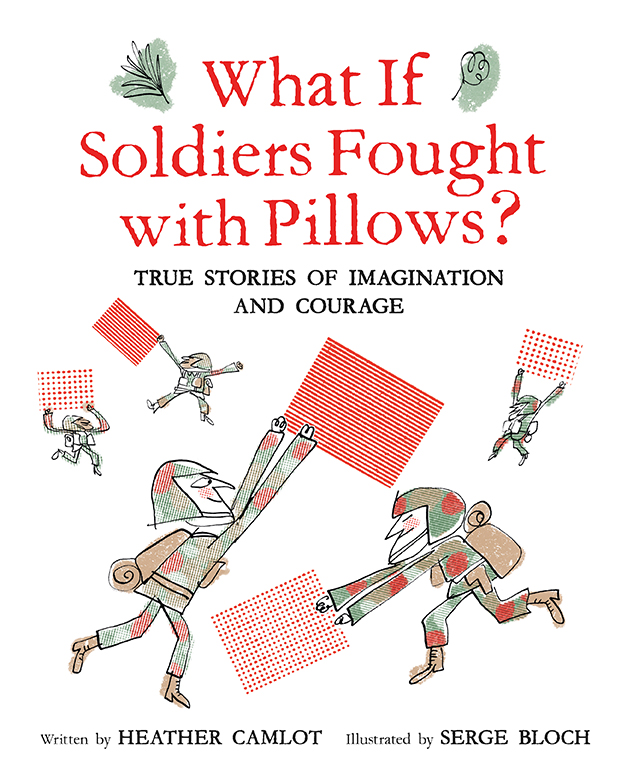 “Where do your ideas come from?”

That’s the question I get asked most from children and adults alike. The simplest answer is, from my life. Don’t misunderstand, I don’t have a wild and crazy life full of intrigue and adventure. Quite the opposite in fact. But there are things that have happened, questions gone unanswered, that I needed to explore.

This is the way the idea for What If Soldiers Fought with Pillows? came, but I have to give credit to my son for this one. When he was around 10, he was having nightmares about war. I lay on his bed with him and he described what he was seeing – bombs, tanks, soldiers…

How does a parent turn horrible dreams into good ones? It took some time, but eventually, I said, “What if the soldiers were fighting with water guns or pillows?” He rolled his head towards mine, checked to see if I was serious. Then, slowly, a smile crept onto his face. And then we both laughed. “But what about the bombs?” he asked, after visualizing pillow fights and sopping wet soldiers. Another moment passed, until I came up with a silly solution to that as well. “What if the planes were dropping flowers and food?” He gave me another smile and eventually fell asleep.

I returned to my room, but lay awake for hours, thinking about how turning scary images into funny ones could be a story and trying to come up with other “what ifs” to fill a picture book. A picture book is what I first created – just whimsical line after line. Owlkids Books publisher Karen Boersma liked the idea and brought it to her team. Editorial director Karen Li said, “What if  Heather could find examples of people and organizations subverting violence, war, and totalitarian power, and introduce each example with what seems like a whimsical sentence—but turns out to be something achievable? What if this were a book that challenged kids to dream, but also showed them ways that the impossible was possible?”

Um, wow. This was just supposed to be a quirky little book. But Karen Li provided an example – the organization Food Not Bombs. And then I mentioned soccer legend Didier Drogba, who helped stop a civil war in his home country of Ivory Coast. I should probably tell you that the Drogba idea also came from my son – he had been working on a biography for a school project! The rest of the profile ideas came from months of research. The more I dove into the subject, the more examples I found and the more fascinated I became.

I am so proud of What If Soldiers Fought with Pillows? and in awe of the amazing people and organizations I was fortunate enough to shine a spotlight on. I don’t know where their ideas came from to make the world a better place, but I’m certainly glad they acted on them.

Ideas are funny things – just fleeting thoughts, imagined pictures. Whether they arise from a child’s nightmare, real-world circumstances or questions about one’s own history, we need to grab them before they disappear. You never know where those ideas might lead.

Heather Camlot is the author of What If Soldiers Fought with Pillows (Owlkids Books, 2020), The Other Side (Red Deer Press, 2020) and Clutch (Red Deer Press, 2017). She is also a journalist, editor and translator. Born and raised in Montreal, she lives in Toronto with her family. Find her online on Facebook, Twitter, Instagram and HeatherCamlot.com.

Filed to: Cantastic Authorpalooza
Tagged with: nonfiction, writing for children, Heather Camlot, What If Soldiers Fought With Pillows, where do you get your ideas