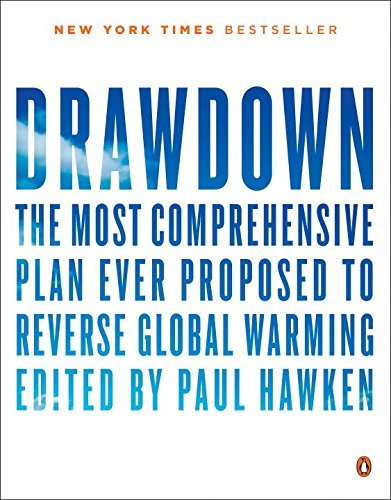 If you’re anything like me, media coverage of climate change has given you the following impressions:

If you’re anything like me, this messaging has also created a creeping sense of despair, helplessness, and fatalism about the inevitability of climate change and the impacts it will have on the Earth, its living things, and the future of human civilization.

But here’s what I learned from reading Drawdown: these impressions, while somewhat true, are definitely not the entire truth. Yes, the problem is real, and serious, and potentially devastating. But it’s NOT too late. It’s not only possible to reduce the release of greenhouse gases into the atmosphere, it’s possible to take out the ones that are already in there.

That’s called drawdown, and we already have the skills and technologies to do it. It’s not a matter of knowledge, it’s a matter of scale.

I know. I was astonished, too.

Because of my work, I spend a lot more time studying climate change research than most people do, but there were a LOT of things in this book that I’d never heard of before. Reading it made me feel both:

Here are the three most important things I learned from reading Drawdown:

Yes, absolutely, fossil fuels are a huge issue, and we need to stop using them. But did you know that chemicals used in REFRIGERATION and AIR CONDITIONING are actually the number one contributor to global warming?

ME EITHER. I haven’t heard a peep about the environmental impact of refrigeration since the early 90s, when scientists figured out that CFCs were tearing holes in the ozone layer and the global community instantly banned them.

And we’ve all heard that plant-based diets are better for the environment, but it turns out that food waste is actually a bigger contributor to climate change. Not to mention a host of other agricultural and land use practices that can be shifted to benefit, not just the atmosphere, but human health.

We’re often told that climate change won’t improve until we walk more, swap our lightbulbs to LEDs, and have Meatless Mondays. Those things are important, and we should totally do them if we can. But most of the drivers of climate change occur at levels above our individual choices – factors operating at the scale of culture, business, and politics. Those are things that we can also change, but only working together – protesting, campaigning, and voting (with both our ballots and our wallets).

This is bigger than any one of us, but that doesn’t mean we can’t make a difference, if we’re willing to think beyond our own households.

Change Is Too Expensive

Cost is also about scale – the timescale over which it’s measured. Yes, change costs more… in the short term. But between today and 2050? The changes proposed in Drawdown actually cost billions of dollars less than continuing to do things the way we are doing them now. Which means that going green isn’t just good for the environment and human health, it’s good for the economy.

Who knew?? Oh right, scientists did. But we don’t tend to hear from them, because business-as-usual industries have more money to spend on advertising.*

Drawdown is not the kind of book you can sit down and read straight through. Rather, I suggest digesting it a spread or two at a time, stepping back to learn more about solutions that interest or resonate with you. This is the kind of book meant to provide a sense of hope and empowerment – it doesn’t flinch from the severity of our situation, but underlines our collective ability to save ourselves and the only planet we’ve got. It’s required reading, and I hope it inspires you the same way it has inspired me.

To learn more and for the latest research, visit the website for Project Drawdown.

*That part is not in the book, but come on. It’s not like it’s a stretch.