Talking to Your Dog Is Not as Crazy as You Think (Plus, Bonus Holiday Freebie!)

Have a junior science lover on your holiday shopping list? Here’s how to give them a special treat:

For every copy purchased, I will mail you a FREE, personalized, autographed book plate!

Want a taste of the awesome that’s inside Fox Talk? Read on, my friends!

Any dog owner will tell you that their pet understands them – recognizes words, follows commands, and somehow knows when they need a sympathetic snuggle. Scientists call this communicative skill and intelligence “social cognition.” It’s the set of knowledge and behaviours that animals – including humans – need in order to survive in social groups. In the case of the dog, humans are a natural part of that social group, and language is one of the major ways humans communicate. Use of human language by dogs is a developing field of study.

Thanks to Othal via Wikimedia Commons for this gorgeous border collie photo!

Take Rico, for example. Rico’s owners claimed that the border collie knew the names of 200 objects, and would retrieve each item on request. Scientists were skeptical at first – after all, a horse known as “Clever Hans” wasn’t actually counting, but reading his trainer’s body language. However, when Rico had to go into a separate room to find the toy his owner asked for, where he couldn’t receive any additional clues, he still got it right 37 out of 40 times.

Rico’s vocabulary, though on par with trained apes, dolphins, and parrots, wasn’t that interesting to scientists. What they wanted to understand was how Rico learned the names of new objects. They placed unfamiliar items in the room with toys that he knew, then asked him to retrieve using a brand new word. Seven out of 10 times, Rico brought the new object. He was using exclusion learning – “I know the names of all of these things, but Mom used a different word, and therefore….” This “fast mapping” is the same technique human children use during language learning, and Rico’s success rate was comparable to that of an average 3-year-old.

Scientists have shown that when humans generalize new words to categories of objects, they do so based on shape, rather than size or texture. For example, if shown a ball for the first time, kids will extend that label to other spherical objects. Similarities in size and texture are less important – a golf ball and a whiffle ball are both balls. Would the same be true for dogs?

A second border collie, Gable, was taught that the word “dax” represented a small, fuzzy, U-shaped object. He was then asked to identify the dax among objects with different sizes, shapes or textures. Unlike people, Gable generalized the word dax to objects the same size, not shape, as the original. He also used texture as an indicator.

Scientists believe that humans rely on shape because, in general, vision is our dominant sense. It’s less clear why dogs may be relying on different indicators, but the results suggest that there could be fundamental differences in the way dogs and people learn and understand language. Which makes it even more incredible that we manage to communicate at all!

Do you talk to your pets? (I have full conversations with mine, so no judgement!) How much of what you say do they understand? Do you ever get the feeling they know a lot more than they’re telling you? 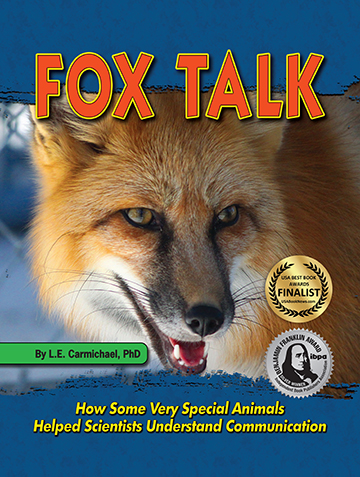 You can read more about human-animal communication in FOX TALK – including the story of Chaser, whose vocabulary trounces Rico’s. A perfect gift for the 8-12 year old on your list!