Via Amy Selleck on Wikimedia Commons

If you had any exposure to the Rio Olympics at all, you probably noticed the giant hickeys several athletes – most notably Michael Phelps – were flaunting all over their events. Attacks by enormous octopodi? Nope. Cupping bruises.

If you’ve had any exposure to the internet since the Olympics, you’ve probably learned that cupping is a procedure from traditional Chinese medicine that involves creating a vacuum inside a glass or plastic cup, then applying the cup to the skin. Skin and tissue get sucked up into the cup. This increases circulation to the site, which could speed healing. So, in theory, could the suction itself. As my massage therapist explained it, massage involves “unsticking” tissues by pressing down, whereas cupping unsticks them by pulling up.

Western science has yet to find evidence that cupping actually works, which is not entirely surprising, given the nature of the treatment. As my massage guy also pointed out, it’s pretty hard to do a double blind study on a treatment that creates a distinct physical sensation and a giant hickey. But that’s OK, because this post is not about whether cupping works.

It’s about the giant hickeys, which are formed when blood rushes into the skin below the cup, causing the tiny blood vessels to burst.

Here’s a fact about cupping marks those Olympic stories didn’t mention – they look an awful lot like bruises left by particular types of blunt force trauma. Specifically, the kind found in cases of child, domestic, and elderly abuse. Depending on circumstances, cupping marks can also look like lividity – the pooling of the blood after death.

This, as you can imagine, is a problem, not for athletes, but forensic scientists. If pathologists don’t know about cupping and the kinds of marks it leaves, they could interpret those marks as signs of foul play, confusing a criminal investigation.

Something like that happened in Turkey in 2015. A 40-year-old man died during surgery to repair shotgun injuries. Most people would assume the shotgun was to blame for his death, but the attending doctor saw round bruises and ordered an autopsy for further investigation. It wasn’t until police interviewed family members that the bruises were identified as cupping marks from the victim’s regular treatments, rather than signs of violence that contributed to his death.

Which just goes to show that being a forensic scientist is a really, really hard job, because you have to know pretty much everything about everything.

Did you watch the Olympics? Have fun playing “connect the dots” with the athlete’s cupping marks? Did their endorsement make you want to try it? 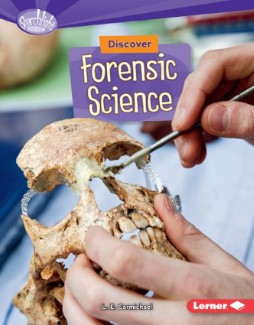 Want to know more about being a forensic scientist? Check out my latest book for young readers, Discover Forensic Science!