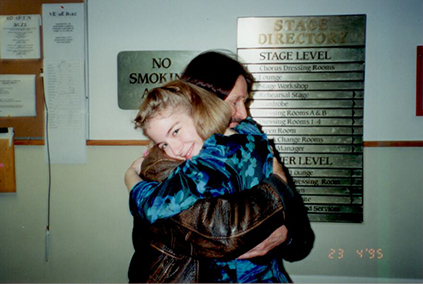 Confession – when I was a senior in high school, I was totally obsessed with Jesus Christ Superstar.

Not the completely dreadful movie version, which I suspect was filmed under the influence of a LOT of mind-altering substances of dubious legality. The Broadway version, which inexplicably underwent a sort of revival that year. I saw it twice in the space of 12 months.

The first time (my introduction to the musical) was in the summer of 1994, with my mom and Grandma at Edmonton’s dinner theatre, which I’m pretty sure was still called Stage West back then. Although Grandma is a pretty devout Lutheran, my parents didn’t follow any formal religious structure. I love bible stories, though (so many great stories about really interesting people!), and Jesus Christ Superstar was such an unusual retelling of the story that I was totally hooked. I loved the depth of the characterizations, the thread of necessity and inevitability underlying the story, the contrast between celebrity and reality, and of course, the music.

I listened to the soundtrack a LOT that year. I’m sure my family got completely sick of hearing it. 🙂

I’m still not quite sure how I managed it, but I convinced my AP English teacher that Jesus Christ Superstar was worthy of analysis in the classroom, so we spent a couple of weeks listening to the soundtrack and watching the execrable movie. And then we found out that a touring production was coming through town, so a half dozen of my classmates (plus Sister of the Traveling Chocolate Kelsey, who will never miss a Broadway show if she can help it), grabbed tickets and went.

Some of the reasons for epicness surround interactions with my then crush/obsession, with a side of best-friend hilariousness, and I don’t want to reveal in a blog post what I might use in a YA novel someday. 😀 But the other reason was because, after the show, Kelsey took us to the secret stage door, where we got:

a) photos and autographs of several cast members

b) a private tour of the stage and set from Ted Neeley, who played Jesus, and

I don’t listen to Jesus Christ Superstar nearly as much as I used to, but I always pull it out at this time of year. That soundtrack, and the memories it evokes, will always be part of my Easter rituals.

Have you ever seen Jesus Christ Superstar? What do you think of it? Do you celebrate Easter, or any other rituals of rebirth?

* That’s right, I hugged Jesus. Between that and the time I was blessed by a monk outside Saint Peter’s in Rome, I think I’m all set for the next life. 😀

Filed to: Life, the Universe, and Everything
Tagged with: Ted Neeley, Sisters of the Traveling Chocolate, Easter, Jesus Christ Superstar, Throwback Thursday