Yes, technically it’s now March, but since I’ll be celebrating Forensic Science and Fuzzy Forensics this Saturday at the Spring Break Into Science Facebook party, I figured one more crime science post was in order.

Today I want to talk about a law enforcement drama that might be less familiar to people than CSI, Bones, or NCIS, but is absolutely worth checking out: Rizzoli & Isles. 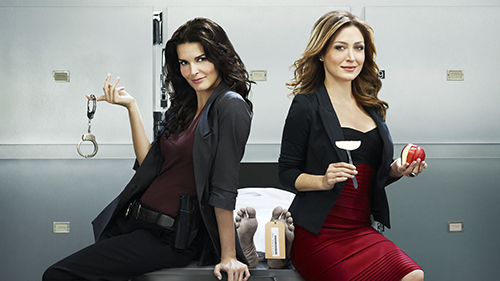 Courtesy of TNT, where you can watch Rizzoli & Isles

Based on a series of adult novels by Tess Gerritsen (whose books I love, but are definitely not suitable for kids), Rizzoli & Isles is special for a couple of reasons. First, the female main characters – police officer Jane Rizzoli and medical examiner Maura Isles. Yes, they are strong, competent women who have earned their positions of authority, but they’re also BFFs, and the portrayal of their friendship often reminds me of my relationships with the Sisters of the Traveling Chocolate.

Dr. Isles’ crime lab may not have the shiny new gadgets the CSI crew are constantly toting around (a detail about CSI that always bugged me, because few crime labs have that kind of budget), but the show’s writers are clearly plugged in to new developments in the field of forensics. Like a breakthrough technique to retrieve fingerprints from cartridge casings.

Fingerprinting cartridges and fired bullets wasn’t possible until recently, because the heat produced by the gun destroyed the skin oils fingerprinting detects. In 2008, John Bond and his colleagues at the University of Leicester (coincidentally the same university where DNA fingerprinting was discovered in 1984) discovered that this heat was actually a blessing in disguise, because it enhances a corrosion reaction between the salts in skin oil and the metal of the cartridge. Once this corrosion occurs, it never goes away. “For the first time,” Bond said of his discovery, “we can get prints from people who handled a cartridge before it was fired. Wiping it down, washing it in hot soapy water makes no difference.” The technique is being used to investigate cold cases all over the world.

For more information on this method and the science of firearms analysis, check out Forensic Science: In Pursuit of Justice. And if you want to watch it in action, it’s featured in season three, episode seven of Rizzoli & Isles, called “Crazy for You.”

Do you watch Rizzoli & Isles? What’s your favourite crime show? Do you watch for the science or the characters, or both? Share in the comments!

Come hang with me and my science author friends! The party takes place on Facebook, and everyone is welcome to attend (it is not necessary to “friend” me, but if you want to, you certainly can). The event should be a lot of fun, and there will also be a chance to win great prizes. See you there!