Lightning Under the Hood, Part 3 – From Cell Phones to Sports Cars

Missed the earlier instalments? Check out Part One – Riker’s Race, and Part Two – The Battery Revolution before reading today’s post.

Remember those brick-sized cell phones from movies in the 1980s? Lithium batteries are the reason we’re no longer carrying them. They’re also what make laptops, iPads, and MP3 players possible.

Lithium is the first metal on the periodic table, and it’s 30 times lighter than lead. That also makes it a good candidate for electric car batteries, which have to pack maximum power into the lightest possible package.

As far as we know, lithium was first used in a battery in 1907, by Thomas Edison. His patent application claimed that 2 grams of lithium hydroxide in every 100 mL of electrolyte improved battery capacity by 10% and dramatically extended battery life.

It was a long time, however, before lithium batteries – Li-ION as they are usually known – could be used to power something as big and demanding as a vehicle. One of the reasons was safety. If the batteries overheat, elemental lithium can combine with water and oxygen in a reaction called “thermal runaway.” This causes the battery to burst into flames.

The problem’s been recognized since the 1970s, when researchers at Exxon were developing watch batteries using lithium chemistry. Their experiments were so dangerous, the fire department eventually threatened to bill the scientists for the costs involved in putting out the fires! Thermal runaway was vividly illustrated in 2011, when a plug-in hybrid electric vehicle – the Chevy Volt – caught fire several days after crash testing. As Chevy officials correctly pointed out, however, proper battery-handling protocols were ignored following the tests; in the real world, there’s far less risk involved with a car powered by lithium batteries than “in carting around 15 gallons of highly flammable [gasoline].” *

Although scientists are still working towards newer and better variations in lithium battery chemistry, there’s no denying their amazing energy potential. Martin Eberhard, cofounder of the electric sports-car company Tesla, says that for him there was never any doubt. “Lithium-ion batteries were at the top of my mind,” Eberhard says, “because in my rough calculations, you could actually fit enough batteries into a car to make a meaningful car.” **

The battery pack in a Tesla Roadster contains 6,831 individual battery cells and weighs 990 pounds. That’s about 200 pounds more than the lead-acid batteries in Riker’s 1896 Electric Trap.  Riker’s car, however, had a top speed of around 24 miles per hour, and a maximum range of around 40 miles. The Roadster’s maximum speed is 125 miles per hour (artificially restricted for legal reasons), and it can travel 245 miles before it has to be recharged. Those results could never have been achieved without lithium batteries, which, by the way, are non-toxic and 60% recyclable.

They might not run on Mr. Fusion, but the cars of the future are definitely here.  Andrew Riker would probably wonder why the heck the future took so long. 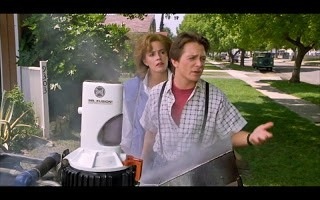 If you don’t get this reference, I’m not sure we can be friends…

Check out the Chevy Volt, the Nissan Leaf, and Tesla Motors for more information on electric cars available for purchase today. Or you can read my book, Hybrid and Electric Vehicles, which is perfect for the tech-minded teen in your life. And you, of course. Science should never have an age limit. 😀

When you buy a car, how important are environmental concerns compared to things like comfort and cost? How much faster or farther would an electric vehicle have to go before you’d think about buying one? Are you holding out for Mr. Fusion?

1 Comment on ‘Lightning Under the Hood, Part 3 – From Cell Phones to Sports Cars’