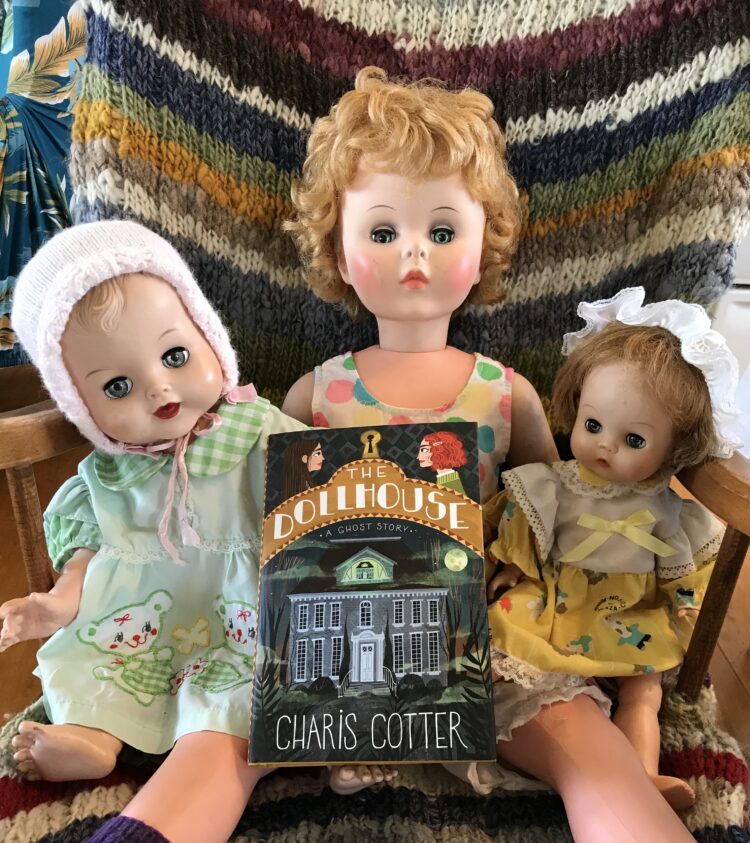 I was devoted to my dolls from an early age, and my love of dolls has never left me. I think I have about 26 or 27 now … I’ve lost count. Most of them are tucked away in a storage box because I live in a small house, and my visitors don’t seem to appreciate dolls the way I do. Many people find my dolls scary, but to me they are just rather quiet, undemanding friends.

When I was seven, a girl down the street, whom I didn’t really like that much, had a great Barbie-doll collection with a Barbie carry-case full of Barbie clothes. I wasn’t allowed to have a Barbie because my mother thought her breasts were too big. So I would toddle down to—let’s call her Wendy—Wendy’s place to play with her Barbies. One day I gave into fierce temptation and stole her Barbie carry-case. Of course Wendy’s mother arrived at the door a few hours later to retrieve it. I got a spanking and it just made me dislike Wendy more.

When I was in my thirties, I spent some time living in the house where I had grown up, and Wendy still lived down the street. Eventually she sold the house and didn’t bother clearing it out. The new owners hauled out all the stuff she left behind and put it in the back lane for garbage pick-up. I was walking by and saw a three-foot walking doll among a pile of cardboard boxes. I investigated, and found two more dolls, all circa 1950s. That’s how Jane, Ruby and Lucy came into my life. After thirty years, I finally got Wendy’s dolls.

Loving dolls means of course I also love dollhouses. And I have a passion for historic houses. A few years ago, synchronicity struck. I became friends with a woman who lived in a wonderful restored Georgian house with a dollhouse in her bedroom. My latest book, The Dollhouse: A Ghost Story, was inspired by that friendship.

I first visited the house when my father introduced me to Ruth, an old acquaintance who, at the age of 91, had just bought a historic house. I had recently lost my mother, and Ruth had been in residence at university with her in the 1940s, so we had an instant connection. The house was grand and mysterious, with lovely furnishings and a kind of hushed feeling, as if it held its elegant history within its walls and was quietly waiting for more gracious parties and ladies in long skirts swishing up and down the stairs.

I visited Ruth many times, and we played with her dollhouse.. She had boxes and boxes of miniature furniture and china and dolls. Eventually I was allowed to venture into the attic, but only with a friend, because the stairs were very steep. When I saw the huge, shadowy space with wide pine boards that were cut from old-growth forest in the 1830s, when the house was built—my story settled inside me like a billowing sheet coming to rest on a bed.

A haunted house. An old lady in a bed upstairs. A secret dollhouse hidden in the attic. And a curious girl who has a concussion and can’t quite figure out what is real and what is a dream. On the very first night she wakes up to find a ghost girl in her bed.

One of the magical things about writing The Dollhouse was that every time I went to visit Ruth in her marvellous house, I felt my fictional house superimposed on it, and my characters began to whisper in the rooms around me, and run up and down the stairs. I’ve never been so specifically inspired before. Blackwood House is almost an exact replica of Ruth’s house, in much the same way that the dollhouse in the story is an exact replica of Blackwood House. Houses within houses, dreams within dreams.

Now when I visit Ruth, I sometimes take a spin around the house, and my book and characters come to ghostly life around me. At home, Jane, Ruby and Lucy sit in my study as I write my next book, and my other dolls sleep and dream in their box in the storage room, waiting for their chance to come out and fill my imagination with their stories.

Charis Cotter is the award-winning author of twelve books, including The Swallow: A Ghost Story and Screech! Ghost Stories from Old Newfoundland. She is one of the authors touring Canada in Canadian Children’s Book Week 2022 from May 2 to 7, when she will visit schools in British Columbia, Manitoba and New Brunswick.

Want more? Check out this video of Charis reading a ghost story from her book Screech! Ghost Stories from Old Newfoundland (appropriate for grades 3 and up):