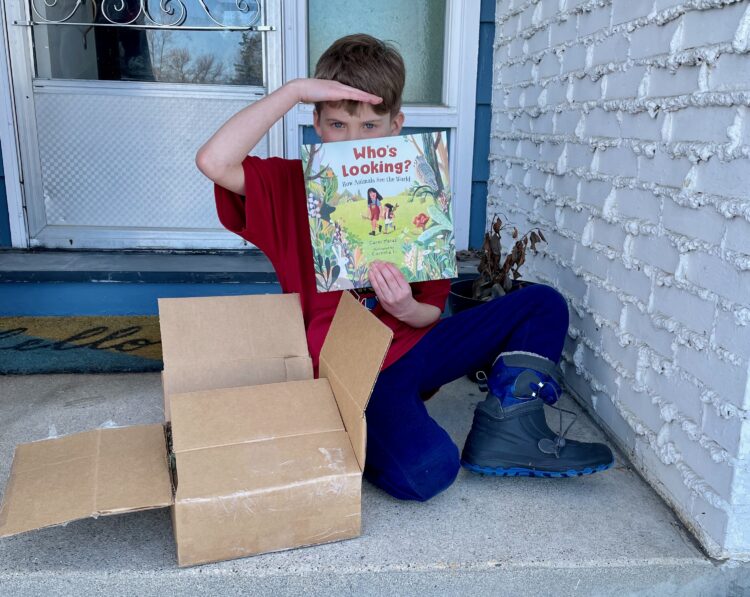 A conversation with my grandson was the catalyst that sent me off into the wonderful, surprising world of how animals see. One summer day we were strolling home from the park. I was pointing things out to him: flowers, leaves, trees, birds, insects. We stopped to cross the street and noticed some ants. I asked him how he thought we would look to them. (He was around seven years old.) We agreed we would certainly look like giants to the ants, if they could really see all of us at all. Which made me wonder – what did they see? And that made me want to write a book about how animals see.

That day I went home and began my research. What I found was astonishing. It was difficult to choose which animals to include in the manuscript since they all have such unique ways of seeing.

Who knew whales could only see shades of grey and black? Who knew rabbits could see so well behind them? Who knew robins can sense the earth’s magnetic field, through their eyes? Or that dragonflies have almost 360 degree vision? And the little ant? It can barely see at all! Well, no doubt a lot of scientists know all of this, but I didn’t, and I hoped I could convey at least part of my excitement and wonder in the manuscript.

The first draft of this book was about a fictional character discovering all of these wonders. The first editor I submitted to said she was only looking for nonfiction. So I thought – well, why not try to turn this into nonfiction? She didn’t buy it in the end, but Orca did and I am very happy about that!

One of the most difficult tasks for me as a writer was to simplify and condense the extremely complicated mechanisms each animal uses in order to see. For instance, cryptochromes and quantum coherence became: robins can sense the earth’s magnetic field through their eyes. For each animal I had to take a very complex mechanism – like what makes up a compound eye – and make it understandable to a 4-year-old. The number of revisions my editor and I went through were massive, (and seemed never ending) until we felt it was both scientifically correct and fun to read and understand.

And the book did end up with a kind of story. Initially I saw it as a book that would illustrate just the animals’ point of view. But as I worked with Orca, and with help from my agent, it evolved into a story of two siblings who explore the world around them, even as the world around them is looking, too. Orca had suggested a bubble on each page and inside the bubble the reader would see what the animal was seeing. However, Cornelia developed the idea of having a cone through which we could see what the animals see. Cornelia developed  a perfect combination of my vision and Orca’s.

The book ends with these lines:

What does the world look like? It depends on who’s looking.

And the wonderful thing is, it takes more than one set of eyes to get a full picture.

And in these difficult times, I hope Who’s Looking? will encourage children to realize that we all see slightly differently, but that diversity is our strength.