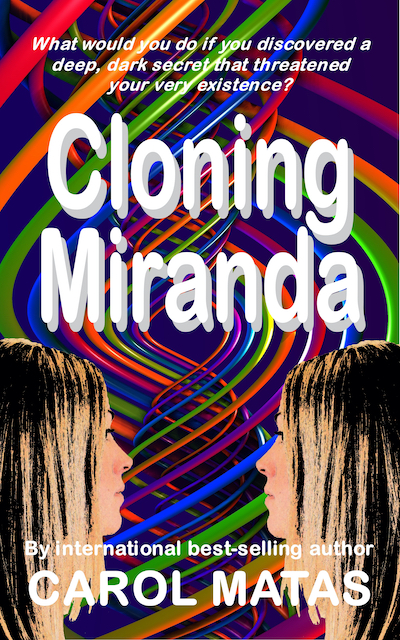 My very first four books were science fiction: time travel dystopian novels about climate change, corporations taking over the world, false prophets and utopias. Hmm. That was 33 years ago! Seems like I was either a prophet or nothing has changed. Obviously, it’s the latter.

Because those books are still relevant, I reworked them and updated them and they were republished as The Edge Of When a number of years ago.

I decided to do the same thing with Cloning Miranda, The Second Clone and The Dark Clone. A few years ago it seemed to me that these books, recently out of print, were as relevant today as they were in 1999 when first published. The science of cloning has taken a huge leap forward since the initial publication with the development of gene CRISPR technology and I was able to update accordingly. And I was able to further explore the questions that the science raises.

Perhaps this is a good time to mention my own inspirations for writing science fiction. I think the first and most important writer who influenced me was Frank L. Baum, the author of The Wizard Of Oz series. In Dorothy he created a brave young girl who had a deep empathy for others, as well as a matter-of-fact acceptance of danger and the exotic, such as lunch boxes that grew on trees or flying monkeys – whole new worlds described with love and wit. And then, of course, when I was older, Star Trek. I must have watched every episode three or four times: again, whole new worlds created with warmth and with hope. I must also add Ursula Le Guin, Doris Lessing, and Marion Zimmer Bradley as favourites, and as writers that influenced me because of the way they blended storytelling with themes and issues that made me think beyond my usual parameters.

The stories and the science and the futuristic settings in science fiction make a perfect backdrop to explore what I like to call The Big Questions. Young readers, I believe, are as interested in The Big Questions as adults are. Perhaps more so, because they are in the process of deciding their futures.

The science in science fiction is important too, don’t get me wrong. Firstly, it needs to be accurate, so time must be spent researching, reading and then fact checking. Interestingly, the science can lead you down certain paths in your storytelling. A similar thing happens when you research historical fiction. Often the facts and the history will lead your characters somewhere surprising or open up new ideas that hadn’t even occurred to you. It all works together – hopefully – to create an organic whole.

At any rate, Cloning Miranda is that mix of scientific discovery, speculation, and fiction, woven together to, perhaps, encourage people of any age to think about things slightly differently, and to expand their horizons.