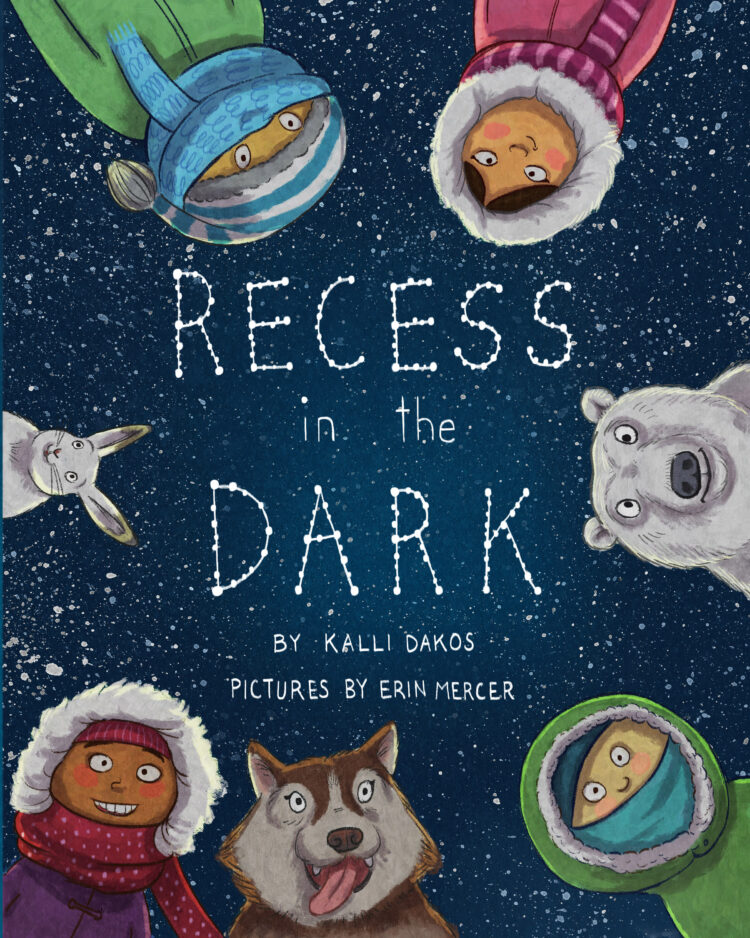 Now and then illustrators get projects that aren’t straightforward, and not only challenge our technical skills but also our ability to research. I was thrilled when I signed my first illustration contract for a children’s poetry book titled “Recess in the Dark.” The poems follow the children’s perspectives on the playgrounds of the Northern Territories of Canada where they play in pure darkness during winter months.

Many pages focused on the northern lights, whose highlighter pinks, acidic green-yellows, lavender purples, and Caribbean turquoises are definitely not printer friendly! I was also met with the difficulty of having to portray night without the pages being too dark. These challenges were solved with my knowledge of colour theory, but something strange happened when my rough sketches needed detail – I couldn’t find visual references easily. 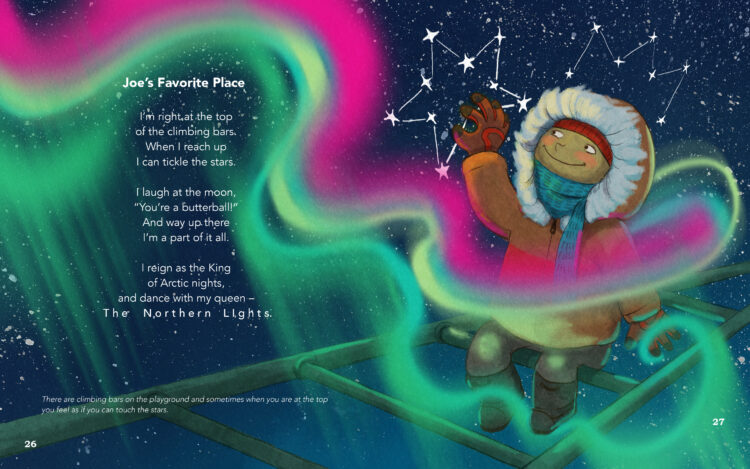 Illustrating accurately truly means you have to embrace becoming an autodidact. With a short 5 month deadline, I finished the project after an immense amount of research.

When I start an illustration, I’m on the hunt for a mood. I like to look at a combination of historic paintings, contemporary paintings, illustrators and photos for inspiration. I looked to the Group of Seven and William Kurelek for winter paintings and a contemporary American painter, Steve Atkinson, for his nighttime scenes. I also referenced one of my favourite children’s book illustrators, Will Terry, as he beautifully depicts vibrant winter scenes.

All of these artists gave me inspiration for the palettes I chose. The saturated blues and periwinkles read as snow at night, so I let those shine in my illustrations.

Having grown up in Ontario, Canada, I felt a connection to my own childhood winter memories: climbing gigantic snow mounds, building snow animals with my mom, trudging through fresh snow, being pulled on a toboggan by my dad in the countryside, and making snow angels. I added many of these personal moments throughout the pages. 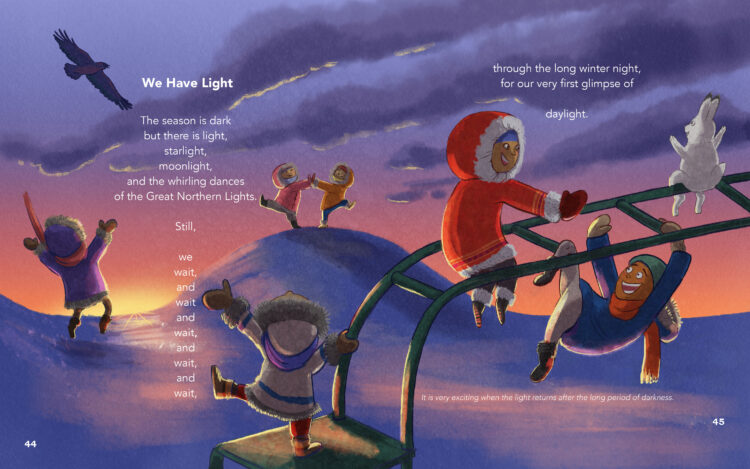 To learn about the terrain, wildlife, culture and history, I took out grade school books on the Canadian Territories. Over half of the Canadian North is above the treeline with rocky terrain and little plant life. These details are never mentioned in the manuscript but were absolutely critical for an accurate depiction of the North.  Since I couldn’t visit the location in person, the National Film Board was another tremendous resource. One poem titled “An Igloo” was particularly challenging to depict realistically, but I found footage in the NFB archives of an igloo being built from start to finish. 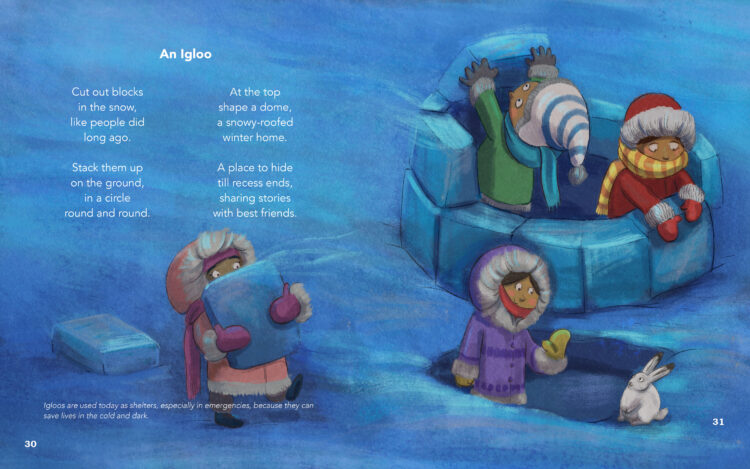 Other clips in their archives showed contemporary Iqaluit terrain and dog sledding teams, an exciting topic in a couple of the poems. Since film footage captures the energy of a moment, it’s more valuable than a static image as it’s the closest thing to witnessing an event in person. 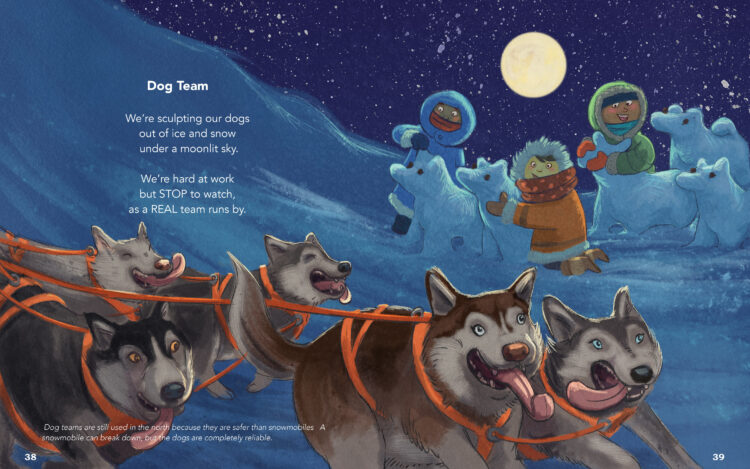 When I’m refining my paintings and require accurate details, often I’ll reference Pinterest boards or Google image search to find the photo reference I need. We’ve all seen the recent trends of perfectly staged photos and the illusion of perfect lives. Playing in the pitch dark when it’s -30C isn’t a fairy tale, so I had to use my art skills to combine my new visual knowledge of the North with the poems.

I ended up combining reference photos of Iqaluit playgrounds during the day with winter landscape photos. Most winter landscapes depict billowy trees heavy with snow, so instead, I referenced how moonlight shines on crusty snow caps and the colour of snow in shadows.

It was extremely challenging finding images and descriptions of how children up North dress. There are many historic photos of First Nations and Inuit families in traditional and ceremonial wear, but it was almost impossible to find current images. I relied on the author’s first-hand experience and the few images she had from her time teaching up North. Mother Hubbard coats, fur lined boots and rabbit skin mittens are more common than the brightly coloured, synthetic, puffy jackets I was used to in Southern Ontario. 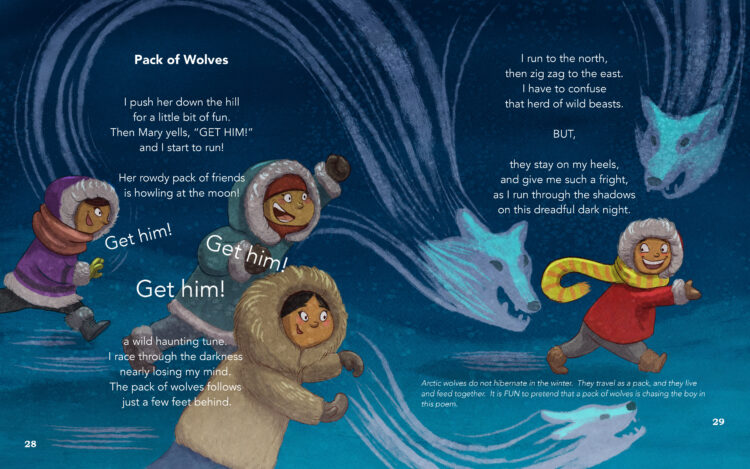 Illustrators have come a long way from having to rely solely on the written word. A part of our own lived experience is in our illustrations, just like the author’s are in the text. But to live up to honouring reality, sometimes a stack of library books, masters’ oil paintings, and video footage are the most invaluable resources. Reference doesn’t always come easy, but it’s always worth the effort.

Recess In The Dark was written by Kalli Dakos and published by DC Canada Education Publishing.