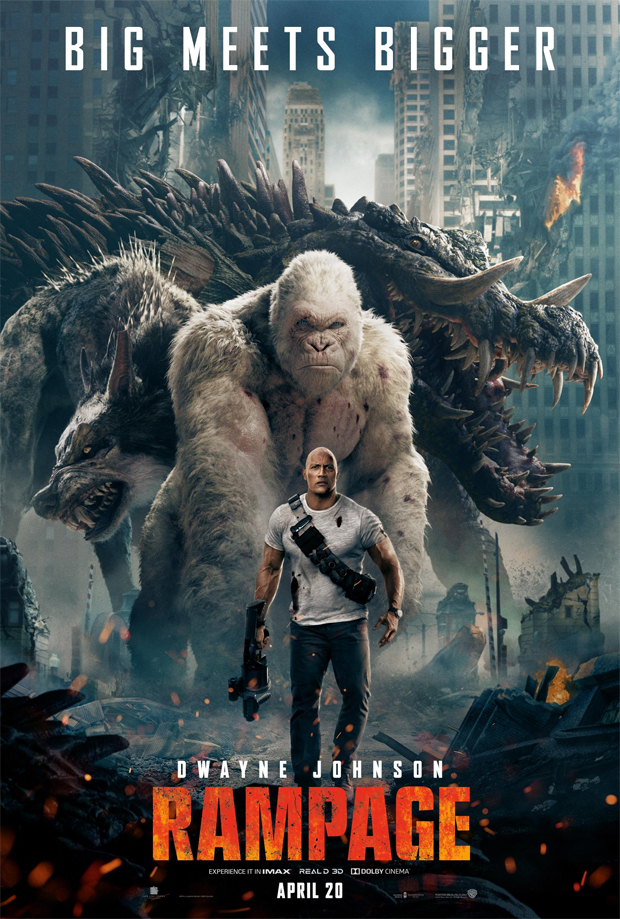 We’re not going to talk about the science of this movie, in which genetically engineered animals go on a – you guessed it! – rampage through Chicago. “Movies based on 1980s video games” is not a subgenre overly concerned with accuracy, or even necessarily plausibility. Mostly, these movies are concerned with fun, and there’s nothing wrong with that. I know I could use a little more fun in my life, especially right now, and I’m betting you can, too. But for me at least, the fun was soured by my disappointment at the depictions of the scientists.

Credit where due, all of the scientists in the film are women. “But wait,” you say, “what about Dwayne Johnson’s character, the hero of the movie?” Mmmmyeah, not a scientist. Everyone calls him a primatologist, but they also call him “Mister,” not “Doctor,” which mean’s he’s not formally trained. In fact, he’s a former soldier whose main qualification for working with gorillas is that he likes animals more than people. That’s a sentiment I’ve experienced myself on occasion, but it’s not what makes someone a scientist. An action hero, yes, but not a scientist. 😉

So yes – the scientists are all women (even the one who explodes in the first five minutes) and that is a definite point in the film’s favour.

However, one of these women is Claire Wyden, the villain of the piece – a scientist whose motivations for her illegal and dangerous research program are never clearly articulated, but probably fall under the heading of “money and power.” Hello, sociopath.  You are… really not helping to uplift the image of women in science.

And let’s be honest, I’m not so sure the character of Dr. Kate Caldwell is helping that much either. For starters, her image as a brilliant scientist is undermined the moment we meet her – in the shot of her bedside table, which is covered with first-year genetics textbooks. Probably no one but a fellow geneticist (hi there!) would notice her remedial reading, but I had some questions about her qualifications after that… Caldwell also has some pretty questionable decisions in her backstory, like the fact that she attempted illegal genetic experimentation on humans. We’re told she did this to try to save her brother from a mysterious disease, a mitigating factor that’s supposed to excuse her behaviour. And while I empathize with it – anyone who’s lost a loved one would – research ethics boards exist for very good reasons… to prevent giant mutant rampages, for one.

Caldwell also did jail time for industrial espionage. True, the evil Wyden arranged that to punish her erstwhile employee for threatening that aformentioned money and power. But that doesn’t change the fact that Caldwell stole secrets and conducted illegal experiments. Both of which make her a legitimate criminal, which… is also not great for the image of women in science.

Side note: I am not the right person to comment on whether or not this IS an issue, much less unpack it, but… while it was great to see a woman of colour cast as a scientist in a major film, it troubled me that the character in question is… also a criminal.

Bottom line? Representation of scientists in this film is better than in (oh so many) other films, but we’ve clearly still got a ways to go. In the meantime, file this one under “fantasy” rather than “science fiction” and you’ll enjoy the giant mutant rampaging animals a whole lot more.

What are your thoughts? I’d particularly love to hear how BIPOC viewers feel about Caldwell’s character!