Today, on Forest Friday, we’re going to take a deeper dive behind the scenes into the process of revision. I’m going to share every draft of the first scene in The Boreal Forest (pages 8-9), and explain how the scene evolved from draft to draft. Since we’re looking at the critical thinking and analysis that goes into writing, this post will be helpful for teachers, as well as my fellow writers. It should also give readers some insight into the things that go on inside a writer’s brain – no CAT scan necessary!

Snow falls from a flat grey sky. It blankets a birch, which droops and cracks.

Snow smothers a spruce. Breath frosting, a marten scampers up the trunk. The spruce shivers and – whoomp! – the snow falls.

This was my very first attempt at getting sentences on the page. As you can see, it is… not good. First drafts almost never are (ask any writer). Shannon Hale once said that writing a first draft is like shovelling sand into the box so that at some point you can build a castle. That is really what it feels like for me – gathering up the raw material and the basic dimensions of the thing I’m trying to say, and in general, totally failing to say it.

But it’s not all bad. The snow, the trees, and the idea of frosty winter exhalations are all there – the sandy building blocks of what’s to come.

Side note: according to Scrivener (my favourite word-processing software), I wrote this draft on August 1, 2017. The Boreal Forest was published on April 7, 2020. Publishing is a very, very, very slow business!

Snow falls from a flat grey sky. It blankets a birch, which creaks and cracks.

Snow smothers a spruce. Breath frosting, a marten bounds down the trunk. The spruce shivers and – whoomp! – snow falls.

Changes are marked in bold, and as you can see, this second draft is almost identical to the first. I changed “droops” to “creaks” to enhance the idea of the sound the forest makes (and it’s a lovely alliteration when reading out loud). I also changed the description of the marten’s movement. Scientists describe their gait as “bounding” and martens are one of the few animals that can run down a tree headfirst, which is a super cool science fact that I thought would look great in the illustration.

But overall, this is still… not good. With so little detail, it’s hard to picture what’s happening, and it’s even harder to feel what’s happening. I wanted to give kids the sensation of being inside the forest with the marten, so I needed to dig a little deeper.

“First Manuscript” is publishing speak for the first draft that the editor gets to see. As you have already figured out, it’s not, by any means, the literal first draft!

Snow falls from a flat grey sky. It blankets a birch, which creaks and cracks.

Snow smothers a spruce. A marten peers out of a cavity in the trunk. Her breath frosts as she sniffs the air, crystals brushing the snowy boughs. They rustle, a tiny sound that Russians call “the whispers of the stars.”

Time to hunt. The marten flexes furry feet and bounds headfirst down the trunk. The spruce shivers and—whoomp!—snow falls to the forest floor. 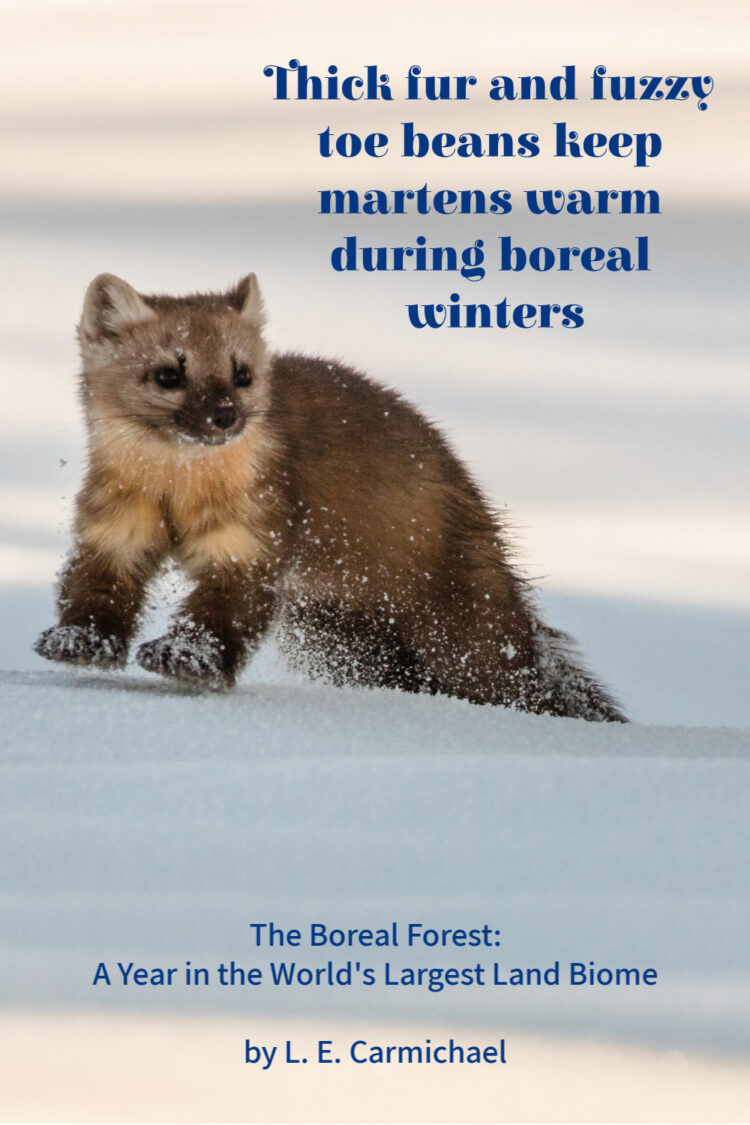 Now we’re talking – this is a much more interesting read, if I do say so myself!

Notice the underlined portion, which includes a quote from my research that I absolutely loved.  I really liked the contrast between that soft, tinkly barely-even-a-sound and the louder pops and cracks made by tree limbs with too much snow on them. And the idea of the stars whispering – what a beautiful image, better than anything I could come up with! As a bonus, identification of the quote as a Russian phrase gives us a stronger sense of place.

In this draft, I also took more time to describe what the marten was doing. This added scientific detail, fleshing out the broader concept of martens as a species that lives in the boreal forest. The phrase “time to hunt,” gave this individual marten more character, because now she’s got a motivation and a reason for the things we see her do – she’s hungry!

The italicized phrase “to the forest floor” is a smaller change,  but an important one. I wanted to help kids visualize what was happening by explaining where the falling snow ends up. And this also created an important transition into the following spread, which describes what’s happening on the ground under that fallen snow.

The first edit a manuscript receives is called the substantive or developmental edit. It tends to focus on big picture issues of content and organization. Here’s the draft of this scene after I responded to my editor’s suggestions:

Snow falls from a flat grey sky. It smothers a spruce, which creaks and cracks. A flying squirrel peers out of a cavity in the trunk. Her breath forms icy crystals in the air. They rustle on the snowy boughs, a tiny sound that Russians call “the whisper of the stars.”

Snow blankets a nearby birch, still thick with tasty catkins. The squirrel charges along her branch and launches herself towards the meal. The spruce shivers and—whoomp!—snow drops to the forest floor.

Woah. How did a marten turn into a flying squirrel?

It was a question of setting. Each spread in the book is set in a particular country that has a boreal forest – and a particular habitat within that country’s boreal (for example, a patch of old-growth forest or a wetland). This scene was originally set in Canada. It had to be Canada (or Alaska), because martens are a North American species.

Remember those Russians and their whispering stars? I had also mentioned Russia in one of the sidebars for this spread, and my editor pointed out that if I kept talking about Russians on a page marked “Canada,” that would be confusing.

Since it’s very hard to argue with that logic, something had to go. And I couldn’t stand to cut that lovely phrase about the stars, so… bye bye marten.

In the end, it wasn’t a huge sacrifice. Flying squirrels, after all, are absurdly cute. And I managed to sneak a sable – a Russian species very similar to a North American marten – into a later scene in the book.

Line edits are just what they sound like – tinkering with the phrasing, punctuation, and word choice in each line, to ensure that every detail is as clear and powerful as possible. We did three line edits for The Boreal Forest, and this scene underwent a few more small, but significant revisions. See if you can hear them in this video!

I hope you’ve enjoyed this peek into my writing process! If you’re a writer, share your revision tips in the comments. If you’re not, please feel free to ask me any questions you may have about writing The Boreal Forest.

Remember to enter the draw for this cool forest-themed prize pack!

Filed to: Forest Fridays
Tagged with: The Boreal Forest, writing for children, revision, editing, evolution of a scene, behind the scenes, children's STEM books

2 Comments on ‘Evolution of a Scene: Revision and The Boreal Forest’