Next Wednesday, April 22, is the 50th anniversary of Earth Day! The Ontario Science Centre is cooking up a fabulous online event and I am thrilled to announce that I will be part of it. We are still finalizing technological details, so make sure to check the Public Appearances page for updates. I’ll also be posting details on Facebook and Twitter, so feel free to follow me there. And of course, pop over to the Ontario Science Centre’s website – they’ve got a lot of great free resources available to house-bound families. 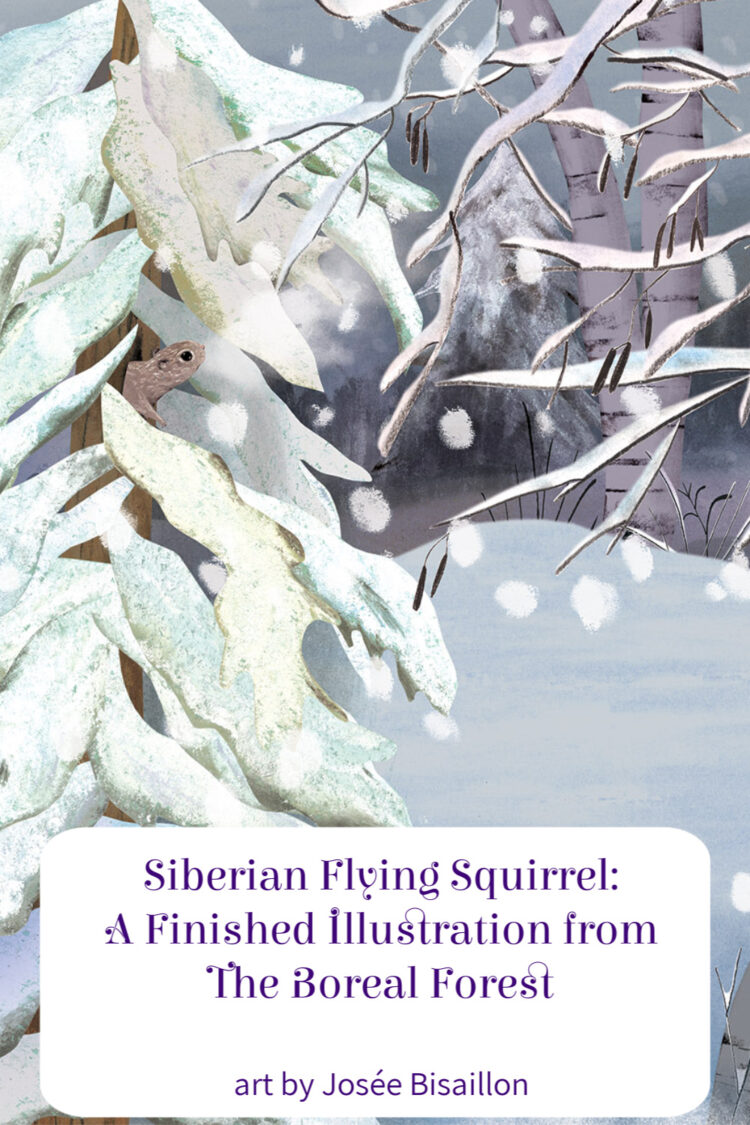 Reminder for anyone who has purchased The Boreal Forest online or through your local bookstore: contact me and I will send you an autographed book plate (offer valid for books purchased before June 12).

On to today’s main event!

My previous books cover a wide range of age groups and topics, but they all have one thing in common: they are illustrated with photographs. The Boreal Forest was the first book I’ve ever written that has illustrations instead. I had no idea how much that difference would affect the writing process. Here are some things I learned while Josée Bisaillon and I put this book together.

The Author Doesn’t Get to Pick the Illustrator

This may be surprising to any non-authors in the audience, but it’s true. In most cases – and certainly in mine – the author doesn’t get to decide who will illustrate her book. I was invited to submit a list of illustrators whose work I liked – a list my publisher promptly ignored. Which, I am SO GLAD they did. It’s hard to imagine anyone doing a better job than Josée. I mean, have you seen this book? It is BEAUTIFUL.

You might be wondering why authors don’t get much say over the illustrators they work with. There are lots of reasons, starting with the fact that many writers don’t know squat about art, and ending with the arcane and mystical powers wielded by the marketing department – something else a lot of writers know squat about. For my part, I tried to concentrate on doing the best writing I could and letting people who were smarter than me handle the rest.

The Author Doesn’t Get to Talk to the Illustrator

I think the reason behind this is like the reason you don’t typically want two large, territorial, ego-driven panthers locked in the same room together – it might get bloody.

The path between author and illustrator looks like this:

and communication occurs mainly in the form of the “art note.” Art notes are suggestions that authors write for the illustrator, and which everyone farther along the chain from them is generally free to use or ignore as they see fit.

Because The Boreal Forest is nonfiction, my art notes were given a bit more weight than might be typical for a fiction picture book. But I still tried to restrict myself to notes that would ensure accuracy, thus leaving plenty of space for Josée to do what she does best. Here’s a sample art note from the manuscript, for what became pages 8-9:

The Author Has to Write Something That Can Actually Be Illustrated

As a writer, one of my worst habits is the compulsion to cram as much info onto the page as I possibly can. If you read my post about the amount of research I did for this project, you’ll understand why! It’s partly to get the most mileage out of the months (and months) that went into the research, but it’s also because I think that EVERYTHING is interesting.

In the past, this hasn’t been too much of a problem, because if I mentioned two species on the same page, the art department could simply include a photo of each. The Boreal Forest is different, because the illustrations are designed to represent a single scene per spread. That meant I was restricted to a single setting per spread, and a single span of time. Which also meant that it wasn’t going to be possible to show moose gambolling along a lake shore AND show loons nesting on an island out in the middle of the same lake. We could hear the loons, but not see them.

Josée did manage to sneak a whooping crane onto the spread about the beavers though. And that made me happy, because, due to word count restrictions, the text on the whooping cranes went under the knife.

But not forever. Authors may cut their prose, but we never throw it away. Instead, we use it for blog posts. 😉