Work-to-Rule Is Costing Me Money, But I Stand With Nova Scotia Teachers 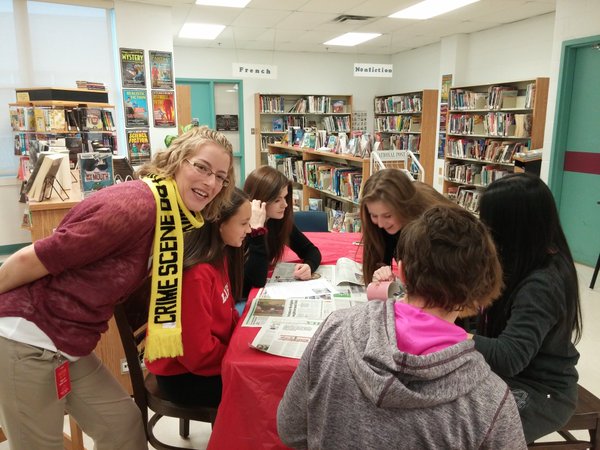 Back in September, I got some pretty fantastic news. More schools had booked me as a guest speaker than any other author in Nova Scotia’s Writers in the Schools Program. Including the inimitable Don Aker, a fact so shocking I still haven’t gotten over it.

I had a joyful visit at Mount Edward Elementary in October, and was gleefully booking the rest of my season when the Nova Scotia Teacher’s Union announced that, due to ongoing contract disputes with the government, teachers would now be “working to rule.” Since the letter of their contracts do not include things like supervising sports teams, arranging class trips, or – ahem – hosting guest speakers, every one of my visits was cancelled.

Now, in February, as teachers have voted overwhelmingly against their latest contract offer, it’s seeming less and less likely that any of those visits will happen this year.

That’s an issue for me. Like most children’s authors, I make more money as a guest speaker than I do from sales of my books. This is a particularly harsh reality for children’s nonfiction authors, because the only writers who sell fewer books than we do are poets. Unless an agreement is reached soon, the teachers’ contract disputes will cost me several thousand dollars that I would normally devote to frivolities like groceries and the mortgage.

But despite this, I stand behind Nova Scotia’s Teachers one million percent.

Since I joined the Writers in the Schools program in 2014, I’ve visited over a dozen schools around the province. Walking through all but one, I was utterly appalled by the conditions around me. Buildings with drafts and creaking stairs and sagging roofs. Funky smells and rooms that clearly haven’t been renovated – or even painted – in decades. Large classes and a lack of supplies – a lack that prompts teachers to invest their own money in materials… a lack so desperate that more than one school librarian has apologized to me because she can’t afford to buy a copy of my book for kids to read after my visit.

Can’t afford to buy a book that kids who’ve met me are now excited about and that directly supports curriculum outcomes.

So yes, work-to-rule is costing me, and all the other Writers in the Schools, a lot of money. But this is so much bigger than us. This is about teachers worn to the bone by untenable working conditions, about schools that are falling apart, about kids who don’t get the attention they need because it is simply not possible to support them as they deserve.

I don’t write children’s nonfiction for the money. Believe me – there are far less painful and far more lucrative ways of earning a living. I do what I do because I believe with every fibre of my being that our children ARE the future. I do it because I know that educated kids become good kids that grow up to make great decisions – that a quality education will allow our kids to change the world for the better.

Our children’s education is an investment that pays dividends to every single member of our society. And that is why I will continue to support Nova Scotia’s teachers, as long as it takes.

Filed to: Life, the Universe, and Everything
Tagged with: nova scotia teachers union, appearances, school visits, crisis in education

2 Comments on ‘Work-to-Rule Is Costing Me Money, But I Stand With Nova Scotia Teachers’