Frightened by My Own Imagination

Writing a novel is a lot more personal than writing non-fiction. Non-fiction is external – I find and repackage information. Fiction, in contrast, comes from the inside, and sometimes what’s inside is a bit… surprising.

When I first started working on my YA fantasy, I got a lot of feedback (some from professional agents and editors) to the effect that it wasn’t edgy enough. My villain, after all, is after world domination, and if he’s too cuddly, readers won’t believe he’s ruthless enough to pull it off. So I rolled up my mental sleeves and reached for my dark side. My nice side did not enjoy this:

Bad Lindsey: Oh, wouldn’t it be creepy if he’s in a fit of pique and cheers himself up by casually killing minions?

Bad Lindsey: Too bad, it’s going in.  And what if when he’s hungry, he eats this?

Good Lindsey: I don’t want to write that!

Bad Lindsey: Too late, I already did.

It went on like this for three long, unsettling days, and in the end, I could proudly (if nervously) say: edgy and dark – check!  No one will doubt this villain’s ability to pull off world domination.  He scares me, and I made him up.  Which is frightening in and of itself. 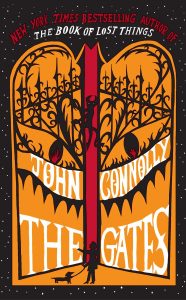 Awesome series for kids – a perfect balance of light and dark.

I like to think I’m a healthy, well-adjusted person, so writing the creepy bits really creeps me out.  After all, if all goes to plan, people (hopefully thousands of them) are going to read this book.  And what will they think of me for creating it?  I mean, who didn’t kind of wonder about Thomas Harris after reading Hannibal?  The only word for that book is “yeeg” (accompanied by shudder of disgust and the need for a scalding brain-shower).  I didn’t go nearly as far as Harris did (the book’s for teens after all), but the very fact that I can come up with this stuff makes me wonder a little bit about myself.

And yes, teen books are a lot edgier than they were when I was a kid.  And yes, about half the people reading teen books are, in fact, adults. But there are still some limits. After all, getting a book into the hands of teens often involves getting it past their parents. And parents have an odd tendency to forget what it was like being an actual teen. 🙂

A couple years back I attended a seminar given by Edmonton writer Gail Sidonie Sobat.  One of the things she said was that if you’re not scared by what you’re writing you probably haven’t gone far enough.  After all, emotional truth is often a dirty, messy, frightening thing.  But if you’re going to write honestly, you’ve got to find the courage to dig for it, no matter how unpleasant it might be.  On reflection, I think she’s right.  After all, the books that stay with you aren’t the warm, fluffy, comfortable ones.  They’re the ones that change the way you see the world.

John Connolly, who writes for both kids and adults, had the most useful perspective on this for me: “Every writer’s life has a light heart and a dark heart to it, and if it is the dark heart that gives birth to all that is worthwhile, then it is the light heart that makes such acts of creation bearable.”

Filed to: Life, the Universe, and Everything
Tagged with: writing, John Connolly, fantasy, dark side

6 Comments on ‘Frightened by My Own Imagination’