Brick and Mortar Magic: Titles Are More Than Just Labels 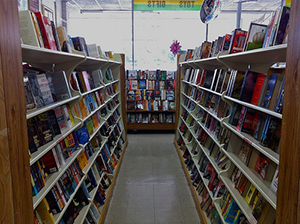 After I got my PhD, I went to work at a bookstore. This was partly because my brain was fried and I wanted to relax with the pretty books. It was also because, as I writer, I wanted to understand how the retail end of the book business actually functioned – and how real humans behave when choosing new books. It was revelatory – and now I share those revelations with you.

Titles Are More Than Just Labels

“Excuse me, Miss?  Can you help me figure out which order these books go in?”

I wish I knew what publishers were thinking sometimes.*  It’s all well and good to list the author’s other publications in the front of their books, but would it be too much to ask for a consistent format?  Apparently.  Titles are given oldest to newest, newest to oldest, with the volume you’re holding omitted from the list, by publication date regardless of series breakdown…  Publishers who only list the volumes they’ve published, skipping right over the first half of the series, don’t help either.

Fortunately, booksellers have a few tools to fall back on.  They love covers with volume numbers printed right on them – on the front or the spine.  Copyright dates can help, too.  Best of all, there’s Fantastic Fiction, an online database that lists authors’ books by series, by publication date, and by pseudonym (check it out – it is 100% awesome).  But there’s something you, the author, can do, too.  It all comes down to the title.

I’m not talking about obvious examples like Janet Evanovich’s Stephanie Plum Series (One for the Money, Two for the Dough…), or Sue Grafton’s alphabet-labeled mysteries.  I’m talking about the way Chapters employees are required to shelve books.

Here’s a little known piece of bookstore lore.  When more than one book by an author is on the shelf, they have to be presented alphabetically by title.  Which means if you give the books in your series titles that follow an alphabetical sequence, they will, by default, be shelved in the correct order.

And while we’re on the subject, don’t include the same word in every title in your series.  It might seem like a brilliant idea when you’re sitting behind your desk, and if you’re only writing three books (Inkheart, Inkspell, and Inkdeath, for example), you can get away with it.  But in a longer series, it becomes horribly confusing for customers, who often have a terrible time trying to remember titles anyway.  That’s right, Charlaine Harris, I’m talking to you.  And don’t even get me started on J. D. Robb.

How do you figure out which order the series goes in?

*Actually, quite a lot of the time. If I knew what publishers were thinking, I would sell a lot more manuscripts!

2 Comments on ‘Brick and Mortar Magic: Titles Are More Than Just Labels’