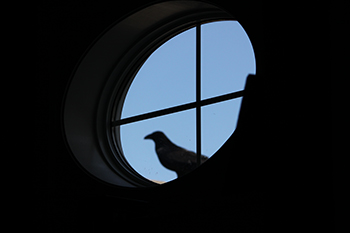 Quork – so named for the noise he made while preening himself in the window… before trying to poke a hole in the glass with his beak.

Raven Mad Daze was a summer festival that used to take place in Yellowknife. If the memory of my junior-high-aged self can be trusted, it happened on the summer solstice, when it’s just as light at midnight as it is at noon.

It’s also a phrase that perfectly describes how I feel today, after being woken up at 5:30 AM by the sound of ravens jumping on my roof.

Directly over my bed.

There’s a bachelor mob of half a dozen that seems to delight in meeting at my house. They bounce and scurry and squawk on my shingles, and sharpen their beaks on the metal chimney of the propane fireplace.

That’s in my bedroom.

In my half-conscious state this morning, I was half afraid they’d pull the thing right off, one would fall through, and I’d end up with a raven in a fish tank. My brain had already wondered how to get the darn bird out before logic and reason managed to assert themselves.

As a result of these feathered shenanigans, I am tired and somewhat cranky today. It is also 29 degrees Celsius outside (84F for my American friends), which is a rare enough occasion in this part of Canada to justify taking the rest of the day off.

How’s the weather where you’re at? Any pestiferous wildlife getting you down?

Filed to: Life, the Universe, and Everything
Tagged with: Yellowknife, ravens, summer