As readers will know, I had to give up refined sugar this year. After the initial cupboard-purge, it’s been easier than I thought it would be. But now it’s Christmas. And part of the fun of Christmas is food – cookies, candy, chocolate… all of which contain sugar.

I decided to start this year’s baking with the biggest challenge – butterhorns. They’re sort of like Pillsbury Crescent Rolls, except made from scratch from a recipe passed down from my German great-grandma (goodness only knows how long it had been in her family!). Butterhorns have already been a big challenge, because making gluten free bread, without eggs or, well, butter, is not an easy task. Add to that the challenge of getting the yeast to rise without the sugar it feeds on? Well. There was only one thing to do. Run an experiment. 😀

Because when you take the scientist out of the lab, she uses the kitchen.

Honey and agave gave the best results, although I think the coconut sugar might have tied if the water had been warm enough to fully dissolve it. Those yeast were working at a bit of a disadvantage. So were the yeast in xylitol and stevia, but it was pretty obvious that my yeast did not care for those options.

I decided to go with honey because it’s got a relatively neutral flavour (compared to coconut sugar), and it’s cheaper than agave. Here’s the full, allergen-free recipe for my Christmas Honey-Butter Horns. Results were favourable. Butterhorns are Tech Support’s favourite holiday treat, and he devoured three while my back was turned! 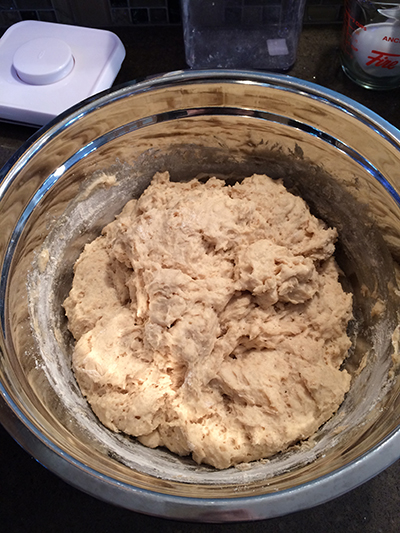 These are delicious warm – I usually unroll them and spread them with more margarine. Tech Support sometimes slices them like a croissant and makes a sandwich. They also freeze well, and can be microwaved to rewarm. Enjoy! 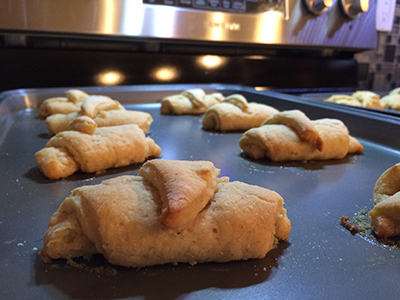 Have you adapted some of your favourite holiday recipes to accommodate food allergies? Share links in the comments!

Filed to: Life, the Universe, and Everything
Tagged with: Christmas, recipes, butterhorns, baking