That Thing Parents Do That Everyone Hates (Especially Their Kids)

By which I mean publicly discussing their kids’ bathroom habits as if said habits were as fascinating and hilarious as, say, watching Tech Support trying to unstick the jammed spatula in the utensil drawer without resorting to bad language.

But at the risk of becoming one of those parents, here are my kids’ stories. Because

1) In this case, they really are kind of are hilarious,

2) It’s Saturday and the higher-functioning areas of my brain have already called it quits for the week,

3) My kids are of the fuzzy variety and therefore unable to sue me for cost of therapy.

You have been warned. 🙂

There’s been an unusually high level of litter box drama at Casa-de-Me recently, because Sasquatch has decided that litter boxes are optional. Not always. She’s still a fan of digging in the cat dirt and uses the boxes more often than not. But on occasion, for reasons we hadn’t been able to determine, she’ll choose to do her business elsewhere. We are not fans of this, and I resent it a little extra, because her “elsewhere” has an above-average probability of being the lowest shelf of whatever bookcase is handy.* 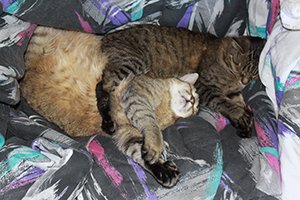 It’s not the number of litter boxes (we’re up to five now) or their cleanliness or the texture of the litter. It’s also not her kidneys, because we had them checked. And believe me, you don’t know fun until you’ve tried to collect a urine sample from your cat. *shudder*

After what happened on Thursday, though, we may have cracked the case.

There I was, merrily tapping away at my novel, when I heard sounds of digging in the litter box behind me. Followed by a growl. I spun around and beheld Sasquatch, in the litter box, and Jagular, just outside it. Pounding on Sassy’s head with one enormous polydactyl paw.

I wish my phone had been handy, because the look on Sassy’s face was utterly priceless: “Excuse me, I am attending to some private business here. I will play with you later!”

I shouldn’t have been surprised, really. Jagular has always had boundary issues when it comes to bathroom time – this is a cat who will scratch at the closed door until you let her in, then sit down on your feet.

Ironically, this is also a cat who needs to be utterly ignored in order to complete her own business. I discovered this shortly after installing the litter box in my office. She’s a chatty cat, and will chirp at you to get your attention. So I naturally assumed she was talking to me, only to discover that she talks to herself while standing in the box – and if you respond, will promptly jump out in order to give you her most offended look.

Ah, kids. Feel free to embarrass your own in the comments. 😀

*I’d have felt worse about the lost textbooks if I’d actually cracked any of them since getting my PhD. I was someone less sanguine when she marked, with almost surgical precision, the entire Outlander series.

Filed to: Life, the Universe, and Everything
Tagged with: embarrassing your kids in public, cats