So The Thing About Bats Is…

…they don’t come out until it’s dark. Which is why this picture is so lousy – there is not a big enough ISO in the world to capture quickly-moving objects after nightfall. 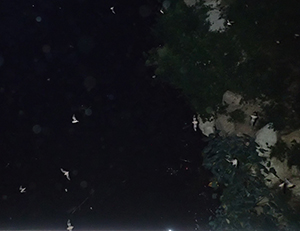 Those tiny shiny things? Those are them.

What you’re looking at is the evening emergence of the over a million Mexican free-tailed bats that make their summer roost under the South Congress Bridge in Austin, Texas. I’ve been to Texas many times since my grandparents moved there, but this was the first chance I’d had to view the bats, and it was amazing.

Well, that’s not entirely true. First it was boring. The bats keep to their own schedule, and the best predictions of emergence time are within an hour’s window. Plus you have to get there early if you want to find a place to park. There are a few things to do while standing around, though, like take pictures of the sunset. 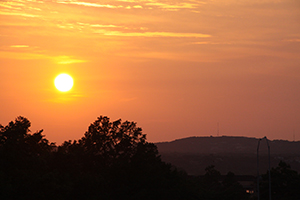 About half an hour after I snapped this shot, the show began. Bats emerged, at first alone or in pairs. These early risers (the early bat gets the moth?) trickled out for ten or fifteen minutes before the floodgates opened. Bats, bats, everywhere! In an age where so many species (including bat species) are threatened or endangered, it was humbling and awe-inspiring to witness the sheer number of creatures pouring out from under the bridge. Not to mention a lot of fun. In addition to all of the ecological benefits bats provide, it’s hilarious watching them fly. The basic bat approach to aerodynamics seems to be “Am I flying? Am I falling? I have no idea! Flapping! MORE FLAPPING!” But hey, whatever works!

Have you ever seen the Texas bats? Are there bats where you live? Are you a bat-fan, or do they creep you out just a little bit? Share in the comments!

If you’re interested in migratory species other than bats, check out my animal migration books, for ages 6-9. Also, Junior Library Guild just featured my book for middle readers, Scientific Method in the Real World. Thanks, JLG!

Filed to: Life, the Universe, and Everything
Tagged with: Texas, Austin, bats, Scientific Method in the Real World, South Congress Bridge

12 Comments on ‘So The Thing About Bats Is…’