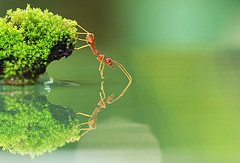 Rainy weather aside, it’s summer in Nova Scotia, which means one thing…. ANTS.

Our house is on a wooded lot, which means we share our yard with birds, deer, beavers, and insects. I have no problem with this – they were here first, after all, and they have every right to go about their business.

Inside is MINE, but the ants disagree. In the last week, they’ve launched their annual assault, swarming up the sides of the house, finding every minuscule crack in its defences… and wandering through my kitchen like they were invited.

We can’t spray inside the house, because of the cats. We’ve sprayed the outer siding, but the wily creatures just alter their invasion pathways. We tried putting ant traps on the hills, but the ravens, who appear to be in on it, stole them and flew away.

So once again, we’ve resorted to carrying tissues everywhere we go, in case we need to engage in single combat. But the ants have us outnumbered, and I’m not loving our chances.

So what about you? What creepy crawlies do you share your house with, and who’s in charge of killing them?

Filed to: Life, the Universe, and Everything
Tagged with: ravens, ants, summer