The Shallow End of the Gene Pool: Dogs and Disease

Many dog lovers are aware of the problems with purebreds. “Pure breeding” involves mating animals with desirable characteristics within the same breed of dog, be they chihuahuas or golden retrievers. These closed gene pools lead to inbreeding, which increases the risk that puppies will develop hip displaysia, heart disease, epilepsy, and even cancer. 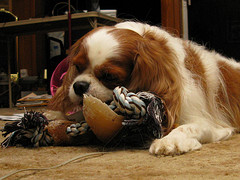 A King Charles spaniel, courtesy of colorblindPICASO on Flickr Commons.

at the University of Surrey released a new study on dogs with Chiari malformations – a condition where the lower portions of the brain droop into the spinal column. This causes intense headaches, coordination problems, and occasionally paralysis.

In Cavalier King Charles Spaniels, Chiari malformations can also cause scoliosis, making these unfortunate dogs one of the few natural animal models for studying scoliosis in humans. 10-15% of human patients suffer from juvenile idiopathic scoliosis, which develops between ages 3-10 years; 20% of these children have underlying conditions, one of which is the Chiari malformation. In both dogs and people, brain surgery to repair the malformation may also cure its effects, including scoliosis.

At genetic and developmental levels, dogs and people have a lot in common, so the existence of puppies with severe health conditions is incredibly useful in medical research. Scientists do not breed to produce dogs with health conditions – they study dogs who happen to be afflicted. Generally speaking, the chance of finding such dogs is much higher among pure breds. If breeders could purge these conditions from their dogs, the animals themselves would be better off, but we would lose an opportunity to learn about human disease. 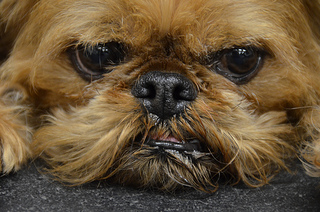 What’s more important – the health of the dogs, or the possibility of helping people? I don’t know the answer, but I’m interested to hear what you think:

Do you own a pure bred dog? What responsibilities do you think breeders have towards they puppies they produce? How do you feel about the use of animals to study human health conditions? What is most ethical?

If you’re interested in learning more about scoliosis, check out my new book for teens with the condition, Living With Scoliosis.

2 Comments on ‘The Shallow End of the Gene Pool: Dogs and Disease’