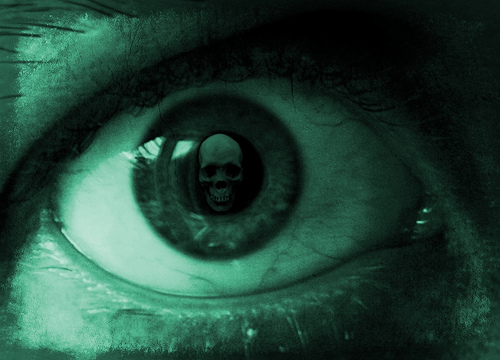 So you know how when you take a picture of someone, you (or someone standing close to you) is sometimes reflected in their eyes? Forensic scientists are working on a technique for identifying bystanders based on this reflection. The images are blurry, but because the human brain is so good at pattern recognition, especially facial recognition, “witnesses” were confident in their identifications, especially if the reflection was of someone they knew.

Full details are here, and you can also read the original study, which is open-access (meaning free!).

I find this totally fascinating, because the Victorians believed that the last image a murder victim saw would be recorded on his or her retinas – a not-completely-illogical supposition, since eyes and cameras function in very similar ways. Early forensic scientists would take photos of the victim’s eyes in hopes of catching these images, a procedure called optography. Investigators on the Jack the Ripper case attempted this without success, but they didn’t have today’s 38 megapixel cameras….

Cool links on optography worth checking out:

Are you fascinated by forensic science, too? Are you still watching CSI after all these years? Who do you think Jack the Ripper really was? Talk to me, people – I’m trying to procrastinate over here! 😀

Filed to: Life, the Universe, and Everything
Tagged with: Jack the Ripper, optography, Forensic Science