The One Where Tech Support Watched Friends, and Laughed Hysterically About the Props

So I’ve been re-watching Friends on DVD, which is a thing I do every couple years. I went to high school and university in the 1990s, after all, and I still catch myself using Chandlerisms like “That is so NOT true,” more than is probably reasonable.

Tech Support and I were in the middle of “The One Where Rachel Has a Baby” the other night when he suddenly hit pause, squinted at the screen, and burst out laughing. Since nothing particularly humorous was going on, I asked him why. “Because that infusion pump is broken,” he said. 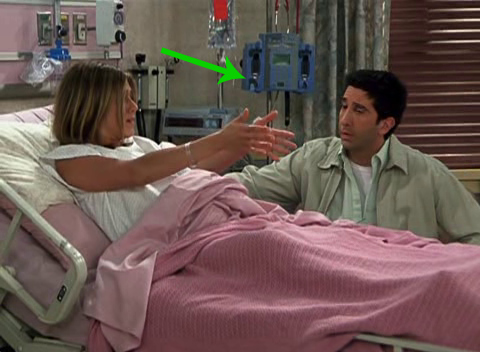 He would know, because he fixes medical equipment for a living, and the first time he ever touched an infusion pump in school, he accidentally broke one of the knobs… causing it to dangle off the front of the device just like the one in this screen cap is doing.

Apparently, he wasn’t the only one. He’s fixed thousands of these things since he graduated, and “dangling knob” was the most common issue with the device.

It’s really hard to watch medical shows with my husband in the room. He is also the guy who rolled his eyes and turned the channel as soon as he saw an obsolete Lifepack in the medical bay of the starship Enterprise.

I can’t really hold this kind of thing against him though. I’m the one who yells “I HOPE YOU BROUGHT YOUR SLEEPING BAG!” whenever someone on CSI says they’ll hang around the DNA lab waiting for the results. Because IT TAKES TWO DAYS.

Are you a Friends fan too? What other TV shows can you watch over and over again and still enjoy? What kinds of shows should I never watch with YOU in the room?

Filed to: Life, the Universe, and Everything
Tagged with: Friends, CSI, Enterprise, infusion pumps, Lifepack, Ross and Rachel, The One Where Rachel Has a Baby