I have a confession to make:

Not music – I love music. My life has a running soundtrack that plays in my head. And, okay, quite often breaks out of my head in spontaneous bursts of song. But regardless of station, here are some reasons I can no longer tolerate radio:

2. DJs. Their application of the English language is casual, and I have the soul of an editor.

3. The music. When they actually get around to playing some, half of it is so bad (to me) that my dashboard is in danger of perforation, so forcefully do I stab the preset buttons to evade it.

These things didn’t used to bother me so much; it appears I’m getting crotchety in my old age.

It’s a rare occasion these days when I listen to anything other than the iPod. Most of these rare occasions occur when I’m in someone else’s car. Like last night, for instance, when the upside of radio suddenly occurred to me.

Occasionally, a song comes on that I don’t own and haven’t heard in years, which will instantly transport me into my own past with an overwhelming sense of nostalgia. And often giggles. 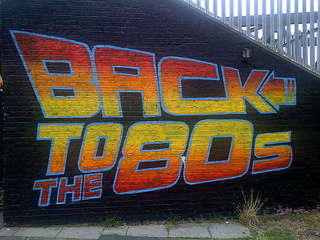 Music is my DeLorean
Image via bablu121 at Flickr Commons

Take last night. I’m on my way to a wedding and what do I hear? “I Think We’re Alone Now,” by Tiffany, a song I’m mildly embarrassed to discover I still remember all the words to. A song which assailed me with the memory of 1988, and neon bicycle shorts, and several hours of air-band practice in the basement of a friend I still exchange letters with.

And then, as we drove home, came Bon Jovi‘s “Living on a Prayer.” To me, Bon Jovi will forever and always mean high school, when “Lay Your Hands On Me” seemed to be playing everywhere my (futile) crush and I happened to be, practically becoming my twelfth-grade theme song. For the dirty-minded among you, I’ll point out I do not mean this literally. I was that ridiculously well-behaved (boring) child who didn’t even taste alcohol until after she’d graduated university (I have witnesses).

Have you noticed the same link between music and memory? What songs immediately remind you of your good-old-days, whenever they might have been? Come on people – if I can cop to air band and neon bicycle shorts, a little reciprocity is only fair!

Filed to: Life, the Universe, and Everything
Tagged with: 80s, air band, Back to the Future, Bon Jovi, memory, Tiffany

4 Comments on ‘Air Band, Neon, and Giggles: The Link Between Music and Memory’