Carnival as a Protest and Theme in Nadia L. Hohn’s Malaika Books

In my presentations, when I ask my young audiences to define a carnival, often, they talk about the rides, costumes and music.  Carnival is also the celebration in which rich foods are eaten before the start of Lent, the forty days which precede Easter,  observed by Christians worldwide.

In the Malaika series, Carnival is a pivotal part of each title in the series— Malaika’s Costume, Malaika’s Winter Carnival, and Malaika’s Surprise.

In Malaika’s Costume, it is the first Carnival time since Malaika’s Mummy migrated to Canada for work.  When the money for her costume does not arrive, Malaika and her grandmother struggle to find a way that she can participate. 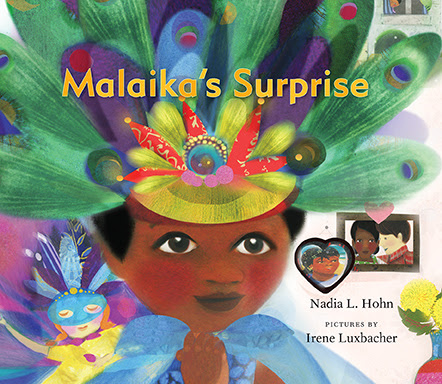 In Malaika’s Winter Carnival, Malaika joins her Mummy in Quebec City, Canada.  Not only does she have to deal with a new family, language, and school.  But, she needs to deal with a new Carnival, the Carnaval de Quebec to be exact.  Instead of the colourful costumes, soca and calypso music Malaika is used to, this wintery carnival features ice sculpting and new customs.

And in my newest installment, Malaika’s Surprise, Carnival becomes a means for Malaika to retain her cultural tradition and memories of her homeland as she adjusts to and embraces her life in Canada and her changing family.

Malaika’s Surprise begins with the main character and her stepsister Adele in colourful costumes playing a game they “call Carnival”.  “Carnaval is here, Carnaval ici!” they sing, a reflection of their multilingual (Standard English, Caribbean Patois, French) and bicultural (Caribbean, French Canadian) household.  Carnival sets the stage of the future surprises to come in this installment.

When I wrote Malaika’s Costume in 2010 as a class assignment in Ted Staunton’s Writing for Children class at George Brown College, I had no idea that it would evolve into what it is today.  From a single book about the search for a Carnival costume to a story that begins at play in costumes for Carnival, this cultural practice became the thread that symbolizes Malaika’s character development and the struggle of every immigrant— retaining and blending elements of one’s culture (language, traditions, celebrations, days of significance, foods) in a foreign land.

My hope is that you enjoy this edition of Malaika’s story and the series will resonate with many for generations.