An Interview With Karen Autio, Author of Kah-Lan and the Stink-Ink

What inspired you to write your new sea otter chapter book Kah-Lan and the Stink-Ink?

It all began at the Vancouver Aquarium where the instant I first saw sea otters, I was smitten! 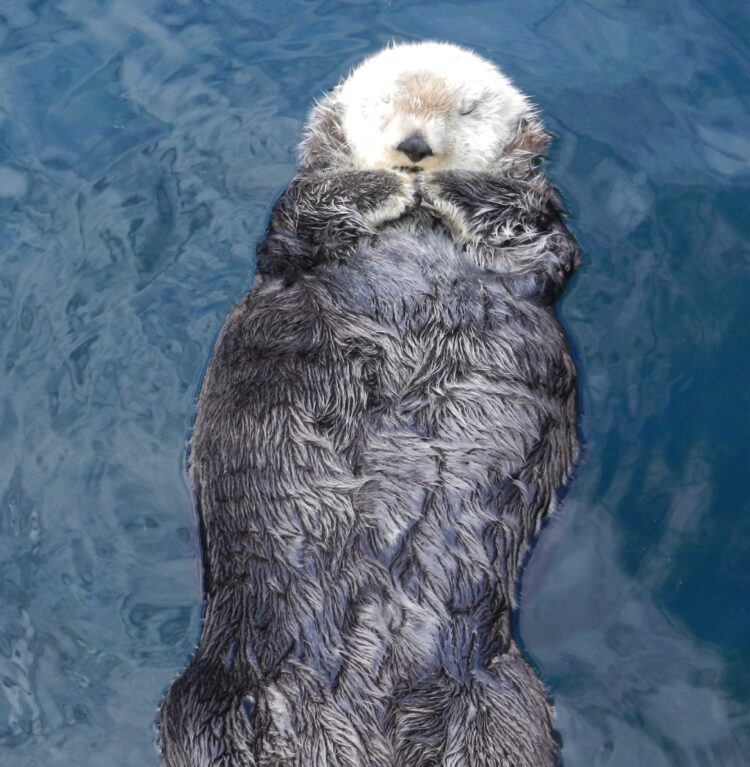 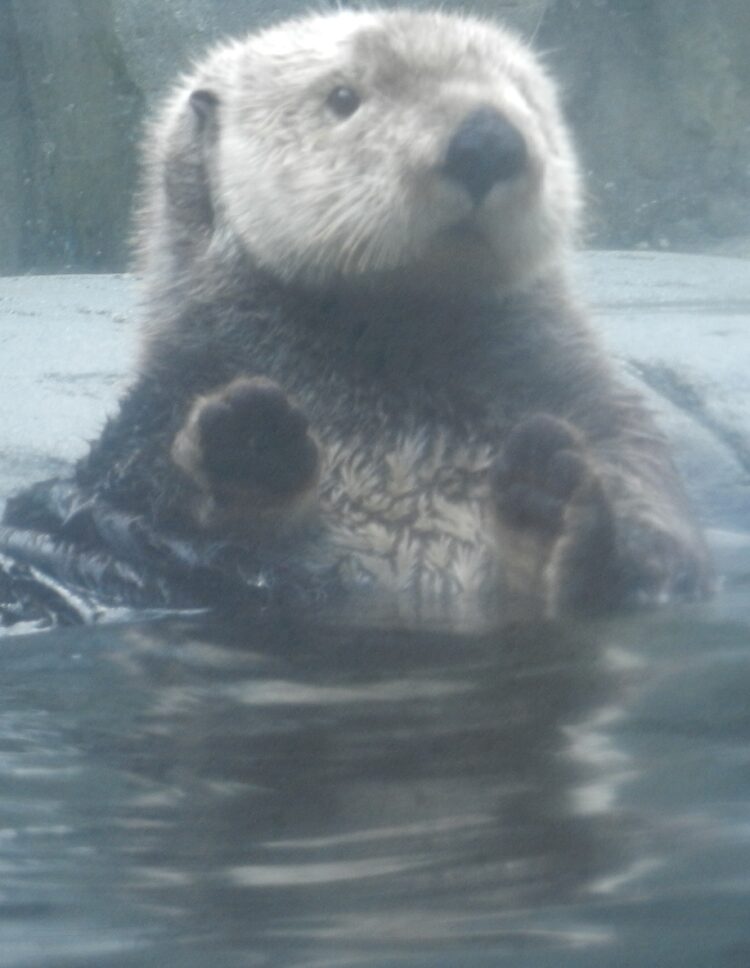 Cuteness overload! Especially when they linked paws! But it got even better. I was amazed to learn that in the wild, these marine mammals not only survive, they thrive, in the cold ocean near shore, hardly ever setting paws and flippers on land. Now that’s resilience. I had to learn how they do it. 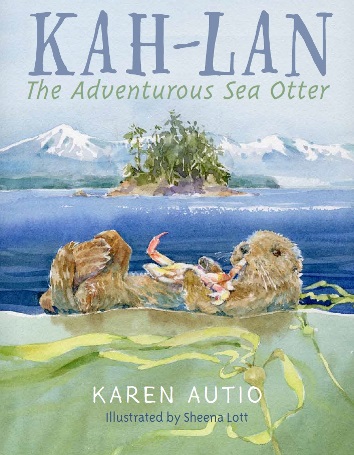 For my short story in a children’s literature course, I chose a wild B.C. sea otter as the protagonist and dove into research. Did you know sea otters can close their nostrils and ears to dive? I wish I could do that!

After revising that story many times (and I mean dozens of drafts, switching from first person to third person, and morphing it into a chapter book then advanced picture book and back to chapter book!), it was finally published in 2015: Kah-Lan the Adventurous Sea Otter, illustrated by Sheena Lott. 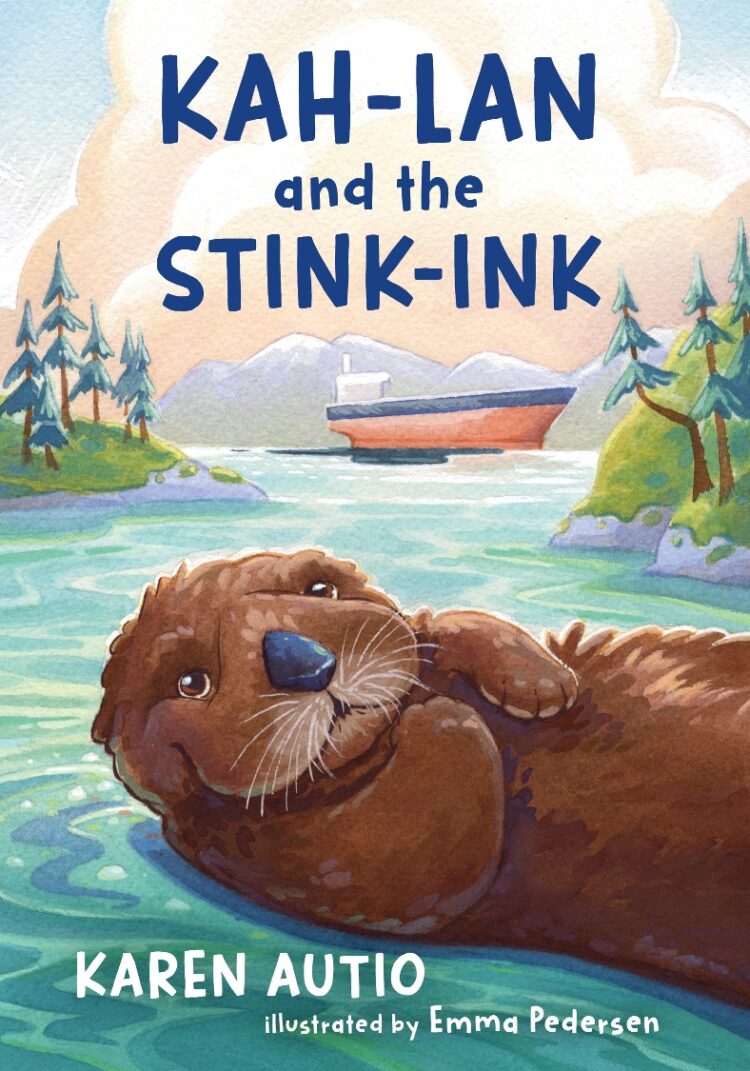 In the original short story, Kah-Lan got into serious trouble and was rescued by community members. However, as I expanded my research (essential for any writing!), I discovered that untrained citizens should never attempt to rescue a sea otter in distress. The animal’s jaws and teeth are strong enough to crack shellfish and would have no problem crushing the bones of a person’s hand. Rather, people should keep their distance and call the Marine Mammal Rescue Centre. So, the sea otter rescue in the first story had to go.

When you’re told to delete a favourite part of your writing because it isn’t working in the story, it’s heart wrenching. But I trusted the advice of my critique partners and removed the humans-rescuing-sea-otter scenes. I thought they were gone forever. Who knew they’d spark a whole other book? After my first Kah-Lan book came out, I thought, What if a Marine Mammal Rescue Centre rescue of sea otters could be the focus of a story?  Believe it or not, one paragraph from that original story appears intact in my new book. 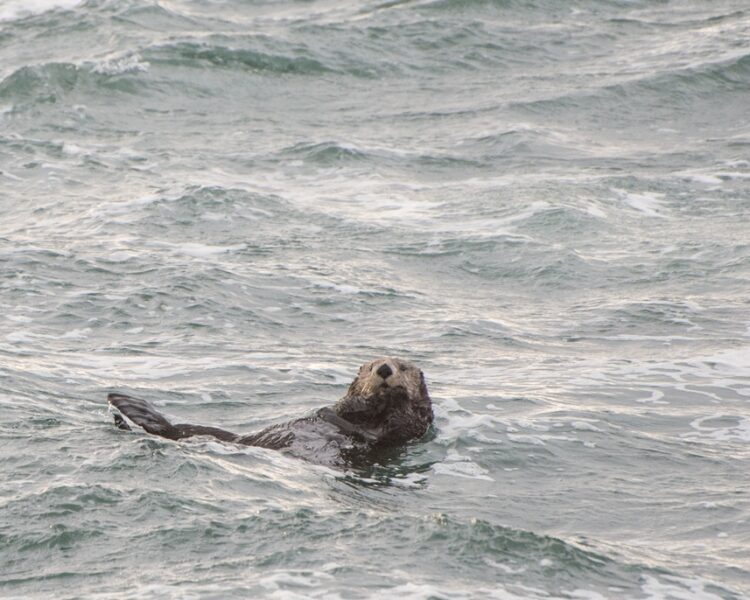 What mentor texts influenced your writing?

There were several, and I’ll talk about two. In my childhood, I read Anna Sewell’s Black Beauty multiple times, revelling in being immersed in the world of horses from an equine point of view. It’s inspiring how Anna Sewell turned her time of being confined to her house into creative expression by writing this classic story published in 1877. I wore out my copy as a child and recently read it again.

Sara Pennypacker’s middle grade novel Pax was a mentor text for me with sections of her story written from the fox’s point of view. Through the ultra-sensitive pads of Pax’s paws and his never-wrong sense of smell, the reader encounters the world in a fresh way.

These stories and lighthouse keeper Jeff George’s photos of a lone wild sea otter near Lennard Island, B.C., inspired me to immerse myself in Kah-Lan’s watery world and bring the reader along.

My goal with Kah-Lan and the Stink-Ink was to write it entirely from a wild sea otter’s point of view, as non-anthropomorphically as possible. 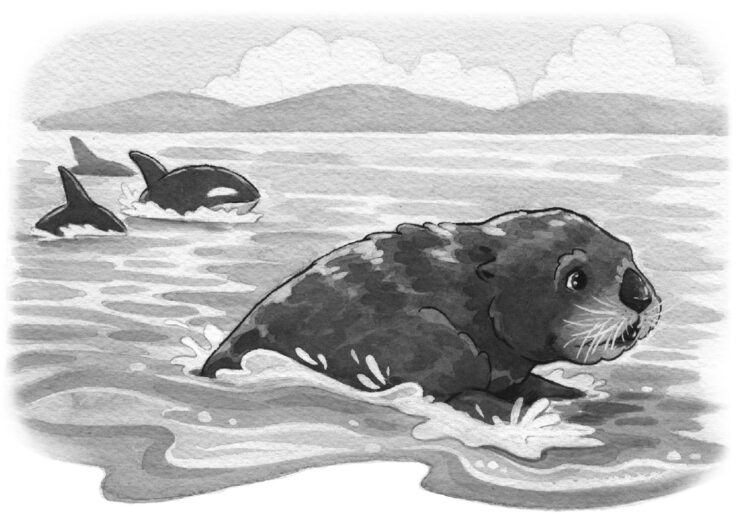 “The sound of water and air shooting up high makes Kah-Lan’s heart pound. He looks back.

Zid screeches a warning. They must hide in sea-trees or haul out on shore. Now.

But there is no sea-tree forest here. And these rocks are too steep to climb. The otters streak along the rocky coast to escape their enemy.

Whoosh. The orca speeds after them. The otters swiftly paddle closer to shore.

At the surface, Zid whistles, urging Kah-Lan and Gula to go faster. Kah-Lan desperately pumps his flippers. His legs quiver.”

What was the most challenging aspect of this project?

Making non-anthropomorphic sea otter characters relatable to young readers. I invented sea-otter-specific words (e.g. sea-trees (kelp) and stink-ink (oil)) that reflected Kah-Lan’s view of the natural world and understanding of the activities of furless ones (humans). One of the hardest parts to figure out was how to include human speech for the reader’s benefit but in a way that shows Kah-Lan’s limited understanding based only on the humans’ tone, volume, and actions. 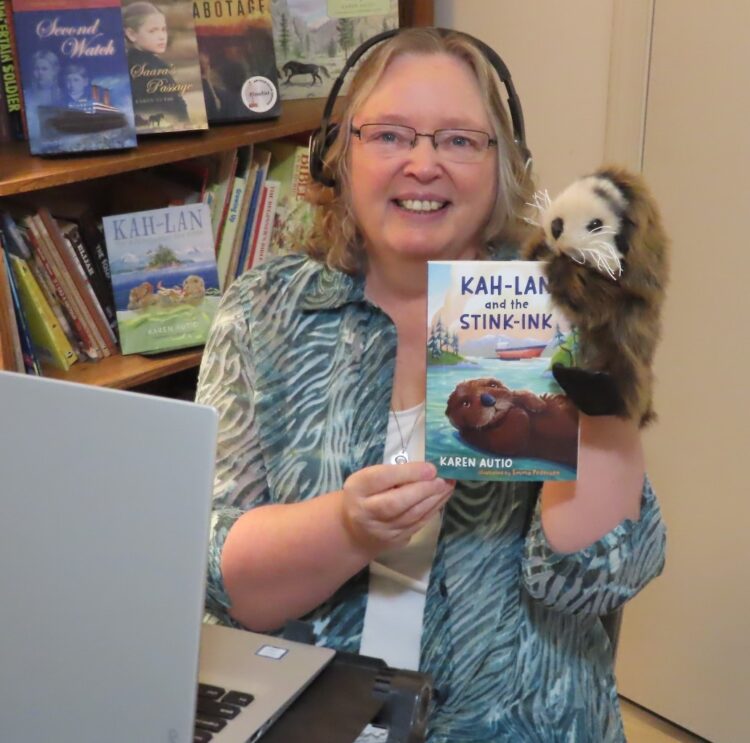 All set for my virtual book launch!

What’s the most rewarding aspect of this project so far?

A critique partner saying she was riveted reading the story! And receiving the full endorsement of the story from Lindsaye Akhurst, Manager at Marine Mammal Rescue in Vancouver, BC. Now I can’t wait to hear what young readers think of Kah-Lan and his sea otter friends!

Children’s author Karen Autio writes animal stories and historical fiction and narrative nonfiction. She grew up horse-crazy and book-loving in Nipigon, Ontario, then majored in math and computer science at university. Karen’s love of family history and the tale of a Finnish silver spoon inspired her to begin writing for children. Her books have been finalists for several awards and Kah-Lan the Adventurous Sea Otter won the 2016 Word Award for Children’s Novel. When she’s not researching, writing, or working as a freelance editor, Karen enjoys canoeing, photographing wildlife, reading, and travelling. She delights in revealing nuggets of little-known natural history and Canadian history in her author presentations to students. Karen lives in Kelowna, British Columbia.

4 Comments on ‘An Interview With Karen Autio, Author of Kah-Lan and the Stink-Ink’