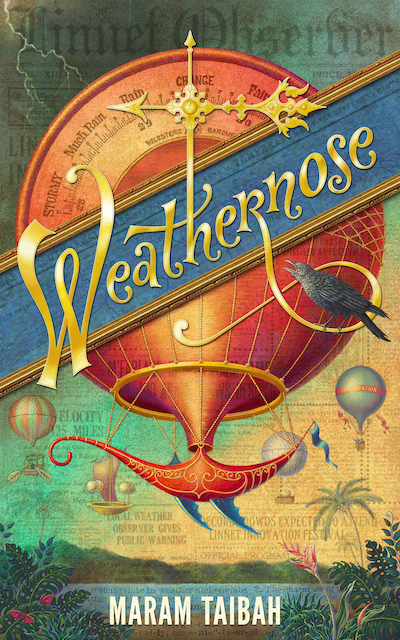 It’s called the Cerulean Universe because of the color of the sea around the lush archipelago, where the characters of Weathernose live. “Not quite tropical and only a touch Mediterranean” was how I’ve always described it.

This world appeared to me as I stood looking out across an inlet of the Red Sea. It was night and the dark spread out in front of me like a void.  There was a far-off shore, contoured with little orange lights. My family was back there in the chalet, in their own world of laughter. I was somewhere else, transfixed by a world that was coming into shape. In reality, there might have been water treatment plants on that island across from me or a ship yard or anything so metallic and unromantic. In my eyes, however, it was an island that was alight with torches, where the citizens were up all night to await the arrival of their prince’s ship. There was music there and dancing and revelry, a festival of welcome.

And that was how the Cerulean Universe was born. I didn’t know back then that this was what it would be called. I didn’t know that it would be anything. In the years to come, this place grew in my mind, still nameless. There were many attempts to populate it with characters and set a story in motion but they failed. It wasn’t until I was in college that the lens came into focus and this fascinating world that wanted to be born into words matured. It was a steampunk world (even though I didn’t know back then that there was a word for this kind of world).

Building the Cerulean Universe was the most natural thing once I understood its personality. It was light and quirky and spangled with color, as opposed to the unhumorous and medieval image I first had in my mind at thirteen years old. The characters were brightly flawed and wonderfully self-conscious. And there were inventions. Always inventions. And books! Lots of books! Hot air balloons! Strawberry tarts!

In the first book, Weathernose, you are introduced to Tart Morning and Cypress Korkul, two rivals – a middle-aged man against a conniving little girl who destroys his career with an invention. They were the dynamic duo for me because of the contrast between them and that was how the story took off. There are other characters in this world, some who are kooky, others who are wise, and a few who are rebellious. There are pirates and mad scientists and fish-out-of-water chancellors who are two young for the responsibility. I am currently writing the sequel to Weathernose. We’ll see where that adventure ends up!