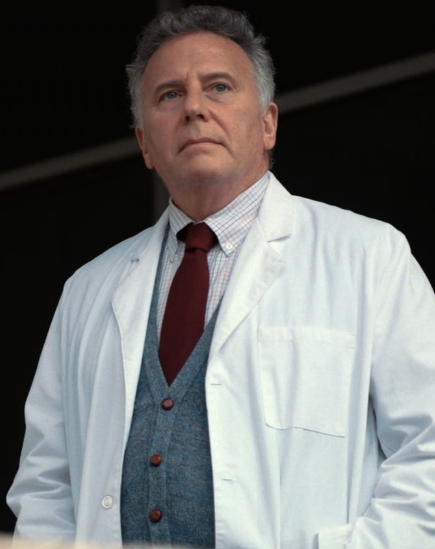 And we’re back for another look at the scientists of Stranger Things. Today, Dr. Sam Owens, successor of the horrible Martin Brenner, new head of Hawkins Lab.

Let’s just take a moment to reflect on the stroke of brilliance that was casting Paul Reiser in this part. I don’t know about you, but my first exposure to Paul Reiser was in the 1990s sitcom Mad About You, where his character is smart and funny and endearingly neurotic. My experience of that character infused my reactions to Sam Owens, whom I found immeasurably more appealing than Brenner.* Sam is also a paternal figure, but he’s paternal in the genial-country-doctor kind of way, the way that puts people at their ease and convinces them to trust him. It’s a very comforting form of paternalism.

However, that paternalism is based on a flaw that’s all too familiar – arrogance.

It’s not the same kind of arrogance as Brenner’s. Brenner’s arrogance is based in an unshakeable belief in his own power. Owen’s comes from a lack of imagination. He can’t imagine that people who aren’t scientists can understand the situation. And he can’t imagine a world where science might actually fail – a world where the unknown defies our attempts to define it, predict it, and ultimately put it in a safe little box where it can’t hurt us. Because of this lack of imagination, Owen’s apparent humility and willingness to admit he doesn’t know everything comes off as somehow false – particularly when we see the differences, early in the season, between the way he treats Joyce and Hopper (the public) and the way he treats his colleagues.

That being said, Owens differs from Brenner is one more way, a way that matters more than anything else: he’s redeemable. He genuinely cares about people other than himself, and particularly those more vulnerable than himself: his kindness towards Will and Eleven is real. Also unlike Brenner, Owens has the ability to learn from his mistakes. And once his eyes are opened, he adapts.

His willingness to recognize mistakes, and to recognize that sometimes, people are more important than discovery, is what makes me like him, despite his flaws.

How do you feel about Sam Owens? I’d love to hear your thoughts.

*But let’s be honest, if you DON’T like this guy more than Brenner, I don’t think we can still be friends.