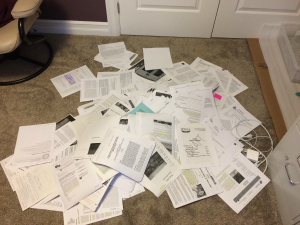 Moving is also the right time to purge the filing cabinet

The stuff, how it does accumulate. Thanks to cupboards and closets and storage spaces, we don’t even realize how much… until we have to move it.

The last time Tech Support and I moved, we had five days between completion of the sale and possession date. We called professional movers and they loaded every single item we owned, because we simply didn’t have time to do things any other way. Our new house wasn’t ready yet, so 90% of our stuff stayed in storage for six months while we rented a furnished cottage. All of which meant that when we finally unpacked, we realized just how much money we’d wasted moving things that should never have made the trip.

Now that we’re moving again (from Nova Scotia to Ontario), we decided to do things differently. Purge first, then pack. May these guidelines make your next move a little smoother and a lot less expensive!

Whether you do it yourself or hire professionals, my calculations suggest that you’ll be paying about $1 per pound of stuff. This is a quick-and-dirty average, of course, but it’s also a really useful way of assessing an item’s value.  Will it cost more to move it than to replace it? If so, it might not be worth bringing along.

If you’re hiring movers, time is a much smaller issue. If you’re packing your stuff yourself, this is a huge consideration. Is the item you’re holding worth the time and effort to pack properly – so that it arrives unbroken? Is it really weirdly shaped? Is it so heavy it has to go in a box all by itself? Packing involves endless decision making and the precision of a Tetris master. In my experience, a lot of items are simply not worth the trouble of figuring out how to move them.

Time Since Last Use

With the exception of holiday decorations or other seasonal items, if you haven’t touched it in a year, you probably don’t need it. This rule also applies to any supplies for crafts or projects that you had every intention of doing some day… but if you’re being totally honest with yourself, you’re never actually going to do. Trust me – getting rid of that stuff is not only cost-effective, but liberating.

Have the cats clawed the upholstery off the chair? Does every dish have a chip? Does the discount toaster oven take 10 minutes to convert bread to toast? If you’re thinking of replacing an item within the next two years, don’t bring it with you. Paying to transport things that are soon due for replacement is a waste of time and money. And trust me, all the things you’d been putting up with in your old place will annoy you a whole lot more in your shiny new home.

We all have objects that are precious, not in themselves, but in the emotions and memories they evoke. Bring those, but ask yourself if you really need all of them. For example, do you need to keep every gift your best friend ever gave you, or just the one that reminds you most strongly of him? For me, these decisions centred around objects associated with my mother. Some were gifts she gave me, or things I bought with her, and some were things of hers that I kept when she passed. Some of these things I didn’t even like… except for the fact that they were hers. Parting with “mom stuff” was painful, but I actually felt much better afterwards – because I realized that I didn’t actually need those objects to remember her.

I’m guessing that most regular readers of this blog are fellow book people, and will appreciate the particular problem of moving books. Book people are very, very attached to their books. But books are heavy. They fill many, many boxes. As a result, they cost a lot of money to move, which means…. it’s time to weed those shelves. I used a very simple metric for this – was I ever going to read that book again? If not, it had to go.

It hurt. I eased the pain slightly by donating the books to my local library, rather than sending them to Value Village with the rest of my culls. At least that way, other book people would have a chance to fall in love with them.

How do you purge before you move? Share your tips in the comments!

Filed to: Life, the Universe, and Everything
Tagged with: moving, tidying up