Where Do Facts Come From? 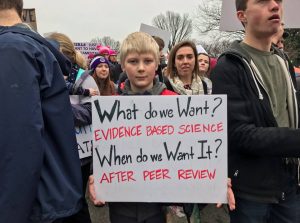 The phrase “alternative facts” was floating around the media (social and otherwise) this weekend, and it made my head explode on multiple levels. First, because I work at a university, and I’m pretty sure if you use those on exams, you fail. Second, because I spend untold hours chasing down sources, and additional sources to check those sources with, to ensure that every single piece of information that goes into one of my books is in fact, a fact. Third, because I used to be a scientist. I MADE facts.

And those facts, unlike the kind people were discussing on the internets, had to be approved by a bunch of other scientists before I was allowed to talk about them in public. We call this “peer review,” and it’s meant to ensure that new conclusions, and the facts they are based on, really are valid and trustworthy.

Here’s how it works:

I’ve published a dozen papers about research I did for my PhD, and I can tell you that it’s not uncommon for the response letter to be LONGER than the original paper. The process is both lengthy and arduous.

So why do we put ourselves through it? Because scientists, like small children everywhere, know that using “alternative facts” is wrong.

Which begs another question – why are kids and scientists held to a higher standard than everyone else?

What are your thoughts on this issue? Share in the comments.

Filed to: Life, the Universe, and Everything
Tagged with: alternative facts, peer review, where do facts come from, how science works

9 Comments on ‘Where Do Facts Come From?’