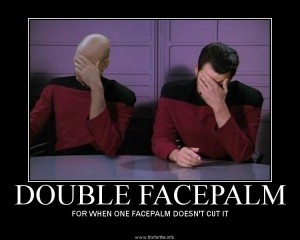 What’s the most trouble your book love has gotten you into? An out-of-control TBR pile? A spouse or parent wondering where all your money has gone? A concussion from walking into a street lamp while reading?

Mine happened when I was still a bookseller at Chapters.

We had a new manager.  She was a lovely lady and I liked her quite a lot, which is why I promised that I would eventually stop teasing her about this…

I’d been reading Tish Cohen’s Little Black Lies on my breaks and only had about 20 pages left, so I decided to stay a few minutes after my closing shift and finish the book.  Incidentally, it’s quite good, especially if you’re looking for books about characters coping with mental illness.

The floor staff packed up and headed home.  The cashiers finished counting and headed home as well.  Literally two minutes later, I finished the book, grabbed my bag, and headed into the hall.  Which was dark.

– and then the sirens went off.

So I’m in the office, frantically searching for a list of manager phone numbers, because I don’t have the alarm code, or a key to the door, and the sirens are really loud, and for all I know, the police are already on their way.  No phone numbers in sight.  (I found out later they were in fact on the bulletin board, but in my defence, the slip of paper is one inch by two, and the sirens were REALLY loud.)

Then the alarm company called.  I explained what was going on, and after a pause best described by the word “huh” the caller promised to try contacting one of their authorized people.  Meanwhile, I called my dad to explain why I was going to be a tad late for dinner.  In between guffaws, he offered to stage a rescue.  Getting out, however, wasn’t the problem – the problem was being unable to re-secure the store after I left.

Sometimes I think I’m too responsible for my own good.

The sirens stopped, which I took as a good sign, and I managed to find our GM’s phone number via the Telus website.  Fortunately our GM is also a lovely lady, who happens to have a great sense of humour.  She laughed so hard she could barely form words, but promised to call the original manager, and failing that, come rescue me herself.

Then a third manager – who’d been contacted by the alarm company – called to ask me how I was doing. In between giggles of her own, she informed me that manager number one had been reached, had pulled a U-turn on the highway and was on her way back to spring me.

At which point, there was only one thing left to do, and it involved chocolate.

I got paid for the extra hour I spent in the store, and after two weeks, manager number one was still apologizing.  This didn’t, however, prevent our GM and manager three from telling the story to the entire staff, who, not surprisingly, also found it hilarious.

Someday I’m going to write a contemporary teen novel that centres around all of the ridiculous things that have happened to me and my friends throughout the years.  Because in all seriousness – there’s no way to make this stuff up.

Filed to: Life, the Universe, and Everything
Tagged with: Little Black Lies, Tish Cohen, trapped in a bookstore, retail, embarrassing moments