Well, I’m back from my conference and nearly caught up. It seems to take two days for every day you’re away to re-establish a steady state. I’m sure there are mathematical equations involved, but quite frankly, I’m still too tired to think that hard.

Here’s what I got up to in New York, both at and around the Society of Children’s Book Writers and Illustrators Conference.

Ugh. Who decided that a 6AM flight was a good idea? Oh right, I did. Because I wanted maximum tourist time the day before the event.

A little extra time turned out to be helpful, because there was some minor drama with the mini fridge in my room, and I was able to both a) sort that out and b) fill said fridge with safe snacks and lunch foods before my next adventure: MoMA!

I don’t really enjoy modern art, so I decided to restrict my visit to the fifth floor (also known as the oldest stuff they had). SUCH A GOOD DECISION. I saw Starry Night and the room full of Monet’s waterlilies, where I spent the good part of an hour just basking. And then I was wandering past this painting, stopped to eavesdrop on a lady who was explaining it to her companion, and ending up buying a print for my office. It’s of a woman who was crippled by polio but still found joy in every moment of her life. It will remind me that even when the journey is difficult, it’s still beautiful. 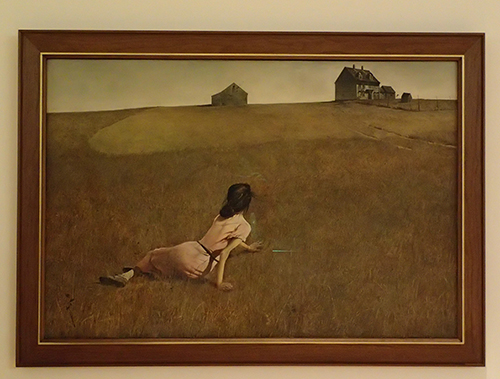 Then I and some new friends met for dinner and watched Bruce Willis and Laurie Metcalf in Misery on Broadway. As one does when in New York.

First day of the conference! I spent it at the Writer’s Roundtables, where I got surprising but incredibly helpful feedback on one of my works in progress. The most fun, however, was meeting up with most of the Canadian delegation to the conference (and an Alabaman we adopted), and enjoying a delicious allergen-free meal at Dos Caminos (mmmm, Mexican food!).

Wow, Saturday. Just wow. William Joyce told an awesome story about wearing a custom made Dickie’s* tuxedo to the Oscars, where he won for a short film based on his picture book. I listened to Rainbow Rowell talk about creating teen characters (developing an even bigger fangirl – ha! – crush on her in the process), and had a total blast at the Gala dinner. 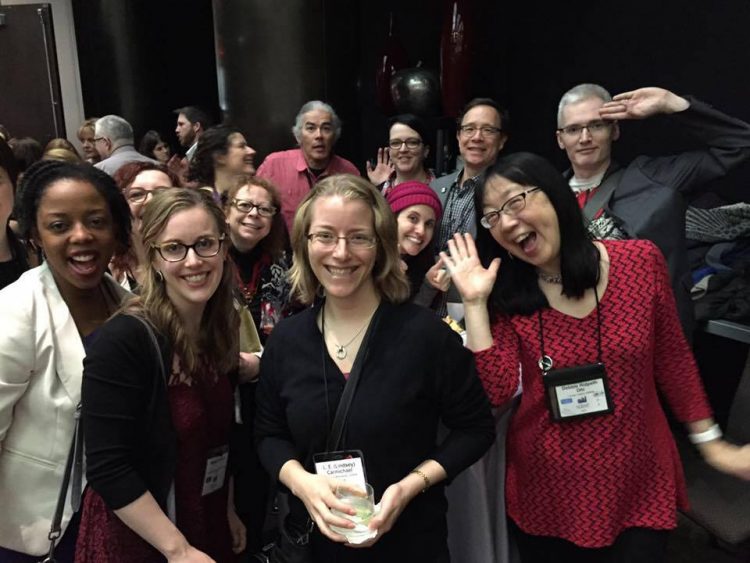 Even with 1200 people in attendance, the Canadians find each other!

OMG, the keynotes. Rita Williams-Garcia was hilarious, Jacquelyn Mitchard inspiring, and Gary D. Schmidt reminded us of why we write for children in the first place. And then I got an armload of books autographed by amazing people. And rode an elevator with Jane Yolen. JANE YOLEN, author of 364 books and winner of practically all the awards there are. It’s lucky she was already talking to other people, because I was too intimidated to say anything to her anyway.

And then I went back to Times Square and froze my tush and toes off in line for tickets to Finding Neverland, starring Kelsey Grammar. It was so cold I had to abandon my plan to explore and head back to the hotel to warm up. Then I got all the way back to the theatre and had a heart-stopping moment where I couldn’t find my ticket in my purse. Until I did, thank goodness, because the show was amazing, both as a musical and as a study in the process of creation.

I didn’t have to fly home until 9 PM, so I figured out the subway and headed up to The Met, where I photographed nine paintings rescued by the Monuments Men during World War II before spending a few blissful hours just wandering in a beauty-induced haze. By the time I left, it was warm and snowing, and I walked back through Central Park, which was empty of everyone except die-hard tourists.

Then I left for the airport when the flight was on time and arrived at JFK to discover it was (ultimately) three and a half hours late. CNN, stranded travellers would REALLY appreciate it if your endless loop of “news” lasted longer than 20 minutes. Or at least, was played more quietly so we could actually concentrate on reading.

Back to real life (in the pouring rain and howling wind). I’ll be posting more pictures on my Facebook profile, so if you want to see them and we’re not already friends, send me a request!

* Canadian friends, Dickie’s is basically the Mark’s Work Wearhouse of the southern states.