I was procrastinating on the internets this morning, as one does, and I came across this handy chart for determining whether you are a geek or a nerd: 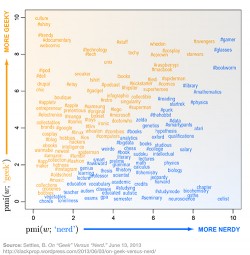 As it turns out, I am nerdy with a sprinkle of geek for seasoning. I am OK with this. Thanks to the pioneering efforts of The Big Bang Theory, it is cooler to be a nerd or geek now than at any previous time in my life to date. I was so profoundly uncool as a kid, most of the cool kids didn’t even bother to bully me. I was such an easy target, it wouldn’t have been sporting.

Speaking of The Big Bang Theory, it occurs to me that, despite having a blog day called “Anything Can Happen Thursdays,” which is a joke from S2E20, I’ve never actually talked about the show on my blog. An egregious oversight that we will rectify right now.

As long-time fans of the show, Tech Support and I have had extensive discussions over which character we’re most like. We’ve decided Tech Support most closely resembles Howard, in the sense that he has a slightly dirty mind and the mechanical skills to fix almost anything. While I have a definite soft spot for Amy, I suspect I am more like Bernadette – small, quiet, and occasionally scary. I’m not sure I’m still scary, but I definitely was in high school, where most of the boys appeared to be too intimidated by my GPA to actually talk to me, never mind ask me out. The curse of smart girls everywhere, as a new study has confirmed. I’d say “revealed,” but the smart girls of my acquaintance alone had compiled enough personal anecdotal evidence to raise that one to the level of a theory way back in the 90s.

As with last week, I’m not sure I actually have a point here. But that, I suppose, is one of the appeals of Anything Can Happen Thursday. 😀

Are you a geek or a nerd? A fan of The Big Bang Theory? Which character is your favourite, and which do you think is your secret alter ego? I love hearing from you, so share in the comments!

Filed to: Life, the Universe, and Everything
Tagged with: The Big Bang Theory, geeks, nerds, Anything Can Happen Thursday

1 Comment on ‘Geeks, Nerds, and The Big Bang Theory’