You Never Outgrow the Joy of Dress Up 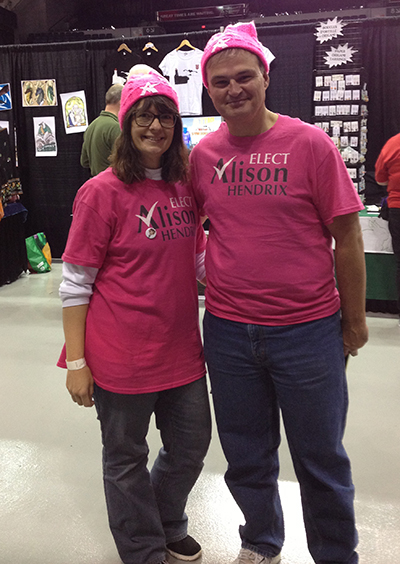 If you don’t get the joke, you need to start watching the sci-fi awesomeness of Orphan Black RIGHT NOW.

I didn’t take many pictures at Hal-Con, but a lot of the fun of vending there was watching the cosplayers walk by. I didn’t recognize a lot of the characters people were portraying, but I was seriously impressed by the creativity and effort they put into bringing those characters to life.

I’m not usually organized enough to do the costume thing at Halloween these days (much less for Hal-Con), but I remember the joy of dress up. I have pictures of one of the SOTC and me playing dress up while seniors in high school, which I am expressly forbidden to share on the internet. 🙂

My favourite of the Hal-Con costumes was the parents dressed as Sam and Dean from Supernatural. The tiny baby in their stroller was dressed as Castiel. I have no idea where they found a trench coat that small, but it was seriously adorable.

What about you? Are you a cosplayer? Have fond memories of childhood dress up? Still play it with your kids or grandkids?

Fuzzy Forensics is on sale! Buy ten copies or more direct from me, and you get them for cost. If you only want one copy, Fuzzy Forensics is also part of the Nova Scotia Local Wishlist – available at indies Woozles and Otis and Clementines. Don’t live in Nova Scotia? There’s always Chapters and Amazon.

Filed to: Life, the Universe, and Everything
Tagged with: Supernatural, cosplay, Orphan Black