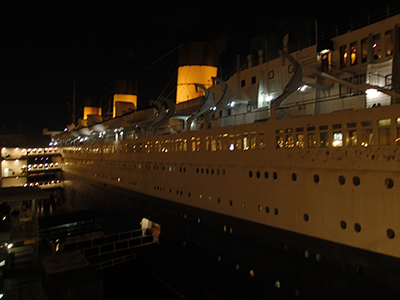 Also out of focus – I packed light and didn’t bring my tripod.

It’s 9 PM and I’m standing in the lobby of the Westin in Long Beach, site of the 2015 American Folklore Society meeting. I’m hanging out with a group of grad students from Western University (including a lady who hails from Cape Breton!), waiting for a cab to take us to the Queen Mary for a pre-conference ghost tour.

It’s dark and we’re experiencing a heady mix of excitement and jet lag (I’ve been awake for 23 hours). After a short ride to the dock, we pile out of the taxi and stare up at the ship, which is enormous, well-lit, and completely innocent looking.

Not for long, though.

We meet our guide, Matt Schultz of ParaXplorer Project, and head for the engine room, where we are promptly turned away because the cast of Castle is filming in there. I want to yell “Nathan Fillion, I’m from Edmonton, too!” but refrain, suspecting that if I do, I’ll be booted off the ship before I hear a single ghost story. I snap a couple quick pictures of the crew and equipment, though, as this is the closest I’m ever likely to be to Captain Malcolm Reynolds. 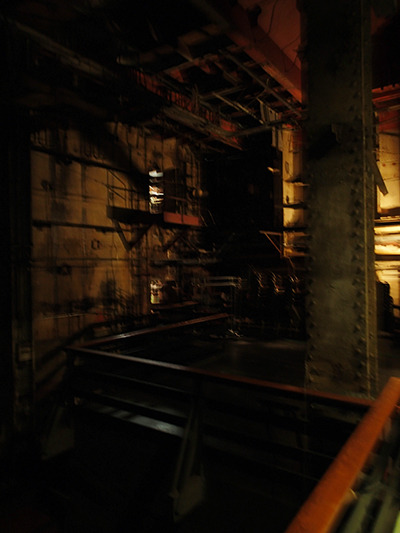 Our tour reroutes, climbing down into the bowls of the ship, 50 feet below waterline. We’re in an old boiler room now, a chamber off-limits to ordinary tourists. It’s dim and cavernous and rusty. The heat is oppressive and somewhere, water drips. A body hangs from the rafters – part of the prep for a Halloween fright-fest. In spite of this bit of theatrical cheese, I can’t help thinking that if anyplace on the boat is haunted, this is probably it.

Matt produces a passel of ghost hunting gadgets from the depths of his knapsack, explaining how each is thought to work. A compass and an EMF detector, for mysterious electromagnetic fields. Dousing rods, for asking spirits questions. Static electricity sensors – in air that’s probably 85% liquid, a blip from these seems especially unlikely. Someone asks if a positive response on one of the gizmos is proof of the paranormal. To Matt’s credit, he says “I have absolutely no idea.” His policy is to eliminate all possible natural explanations for a result first, but the farthest he’ll go on ghosts is “maybe.”

As a scientist, I appreciate this. Just because science hasn’t yet discovered an ordinary explanation doesn’t mean there isn’t one. On the other hand, the one thing science can never do is definitively prove that ghosts (or bigfoot, or aliens) don’t exist – there’s always a possibility that new data will come to light. For my part, I’m an open-minded skeptic. After all, Einstein proved that matter can turn into energy. Whether that energy retains a consciousness and a personality is a different question.

A lot of staff and visitors to the Queen Mary have reported ghost sightings. In addition to visual sightings, people claim to have been bumped, pushed, or otherwise manhandled when no hands were in sight. And the ship is also famous for disembodied voices, not to mention EVPs. 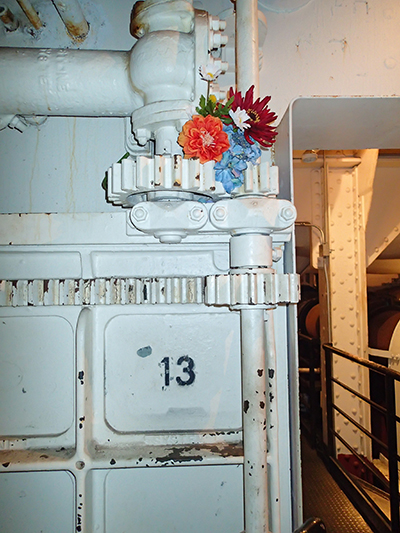 Door 13, where John Pedder died. The flowers are a prompt for soliciting EVPs.

EVP stands for electronic voice phenomenon. It refers to voices that appear on audio recordings – voices that no one heard at the time the recording was made. Matt has a recorder that plays back on a 15 second delay, meant to support real-time conversations with potential spirits. Now we’re crowded into a tiny drywalled area in the back of the boiler room, wearing headphones and straining to hear incorporeal voices responding to Matt’s questions. The space was a greenroom, from the days when Disney ran the Queen Mary. Attempting to contact spirits from the Disney greenroom is an exercise in irony as much as science.

Castle has cleared out of the engine room, so we troop over and attempt to contact the spirit of seaman John Pedder. Although ghosts of all ages and sexes have been reported on the ship, John is an especially good candidate for a lingering presence – he was found crushed in hydraulic door 13. Matt’s team has recorded EVPs that could be John responding to questions, but he’s not talking tonight. Someone asks Matt if he’s ever “enhanced” the evidence he plays for his tour guests. Never. “In this business,” Matt says, “integrity is everything.”

Our next stop is the first class pool, another space not on the regular tour. It’s thought to be inhabited by two spirits – a ghost cat that our security escort saw once and believed was a living animal, and Jackie, a little girl who, according to the EVPs, loves to join visitors in a rousing rendition of Ring Around the Roses. Since the song is about the bubonic plague, this musical choice also strikes me as highly ironic. One of my photos captures a mysterious orb, superimposed on the balcony door. A spirit orb? There doesn’t appear to be dust on the lens, as none of my other snaps show a spot at that point. Lens flare is a distinct and unromantic possibility. I took a couple shots from the same angle, though, and only this one shows anything unusual. A ghost? In Matt’s words, “Who knows?” 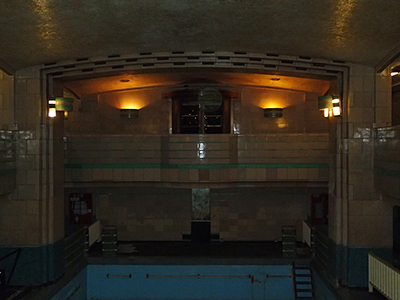 Look closely – the orb is dim circle near the top right corner of the door.

It’s 1:30 in the morning now, and I’ve reached that stage of fatigue where my entire brain feels slightly out of focus. Maybe this will make my skeptical mind more sensitive to visitations from the beyond? Matt leads us into the women’s change room, a short, narrow, hall lined with cubicles. “Step into any cubby you feel comfortable in,” he tells us. Comfortable is not likely. The cubicles are cramped and distinctly coffin-like, it’s pitch black and tropically humid in here, and we’re about to call for Jackie. Matt sets out a teddy bear, a digital recorder, and four static electricity detectors. We sing in the dark, leaving out the last word of each line in case Jackie chimes in with an EVP.

And then it happens. The static detector farthest from us flares – a burst of green light so short-lived, I’d suspect my exhaustion-steeped eyes imagined it… except for the fact that everyone on the tour exclaims at the same moment. The humidity is condensing on my skin, so I’m having a rough time thinking of a scientific explanation for the presence of static electricity in the room. I find myself wishing that I’d brought my own voice recorder, and wondering whether the two that were running have picked up anything other than us…

In the clear light of the following, caffeine-soaked morning, I settle in for my first panel of the conference. The second paper on the program?  “There’s an App for That: Legend Tripping With Smartphones.”  I suspect Matt would have the same opinion of the radar-blipping, random-word generating tech that I do…

Then again, if ghosts exhibit electromagnetic fields, an ability to muddle electronics isn’t that far fetched…

Interested in EVPs? Check out some of the recordings Matt’s tour groups have made on the Queen Mary.

Want to test a ghost-hunting app at your favourite spooky spot? Click here for reviews.

For a lively and entertaining discussion of history and science in the search for the human spirit, read Spook by Mary Roach.