Way back in December, Tech Support and I were talking about discretionary funds – the money we spend on:

We realized that we had no idea where this money was really going or how much we were spending on stuff that could not, even in the most liberal sense of the word, be considered necessities. We agreed that we had to give ourselves permission to use our money in fun ways (it’s a drag being practical ALL the time), but we needed limits and a trackable system.

And The Five Dollar Jar was born. 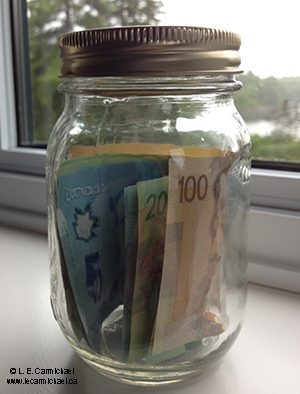 My jar – couple more months and I’ll have my own ukelele!

Adapting an idea from Gail Vaz-Oxlade, we found two mason jars and labeled them with our names. On the first of every month, $50 in five dollar bills gets added to each jar. We’re allowed to spend our bucks on anything we want, guilt-free, as long as:

We’re seven months in now, and it’s amazing how well the system is working. Some of the things I’ve noticed:

In other words, The Five Dollar Jar has been a resounding success. We’re spending less money on “frivolous” purchases, and by focusing on things we really want, we’re getting a lot more bang for our buck.

Are you a fan of Gail Vaz-Oxlade? Do you have trouble tracking your expenditures? What systems have you tried to manage your budget, and how did they work for you? Share your tips and experiences in the comments.

Filed to: Life, the Universe, and Everything
Tagged with: budgeting, Gal Vaz-Oxlade