The Science (and Art) of Sun Fade

I got to experience this first hand with the curtains in my basement. It’s a walkout, so there are a couple floor-to-ceiling windows shaded by the deck and a couple of half-sized windows that… aren’t.

I experienced the joy of making curtains in our previous house. And when I say joy, I mean hair-pulling-where-is-my-chocolate-why-did-I-ever-think-this-was-a-good-idea frustration, which is why I decided to buy commercial curtains and blinds this time around. Custom is way too expensive, though, so I popped into Home Outfitters and found these great embroidered coppery-red panels that worked really well with the colours in the room, and hung them up. Not being custom, they were a bit too short for the floor-to-ceiling windows and way too long for the halves.

I didn’t get around to hemming (see above) until my Crafty Sister of the Traveling Chocolate came out for a visit last year, at which time we discovered that the unshaded half-window curtains had faded almost to yellow, but only in the parts that actually covered the window.

So off we went to Home Outfitters, where we (of course) discovered that the curtains I’d bought were now – dun dun dun – discontinued. There was one left in the discount bin, which I snapped up. But although it was much too long for the window, it wasn’t long enough to be split into the two panels needed to cover the width of the window.

Stuff like this is why there are so many DIY disaster shows on TV. 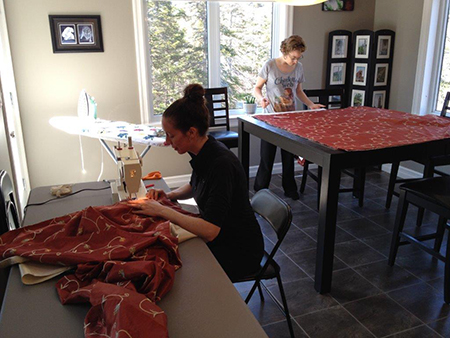 Team crafting should be an Olympic sport.

Crafty Sister, however, was undaunted. We found curtains in a complementary colour and with some obsessive measuring and creative seam work, managed to lengthen all four panels on the floor-to-ceiling windows before she had to go back to Alberta. Although when I say “we,” I actually mean her. She was the mastermind, while I was responsible for ironing, pinning and seam ripping. However, I am proud to say that after she left, I assembled coordinating panels for the half windows ALL BY MYSELF, and with only minimal swearing.

Those panels? They’re still in my closet, waiting for Tech Support to get around to applying UV-blocking film to the window.

Yes, it’s been over a year.

What about you? Any favourite possessions that were sacrificed to the sun gods? Any DIY crafty disasters? Share in the comments! And remind me to tell you about the time Tech Support had to cut a hole in the living room floor…

Filed to: Life, the Universe, and Everything
Tagged with: Sisters of the Traveling Chocolate, Sci Show, sewing, curtains

2 Comments on ‘The Science (and Art) of Sun Fade’