The Lingering Trauma of the School Fundraiser

I did an author visit at a local elementary school a couple of weeks ago, and when I returned to deliver the signed books kids had ordered, the secretary handed me a form for their current fundraiser – five pounds of fresh caught haddock for $30.

As well as being filed under the heading “Things That Could Only Happen in an Atlantic Province”, it got me thinking about some of the fundraisers I had to participate in as a student. Although “thinking” might be too gentle a word. “Flashing back on” is a bit more accurate.

Because let’s send a seriously introverted nine-year-old who’s terrified of new people around the neighbourhood to knock on the doors of total strangers in hopes they’ll buy things they don’t actually want or need, just so she’ll go away and leave them in peace. Yeah, that will end well.

In my twelve years of public school, I remember selling chocolates, spices, and oranges and grapefruits shipped up from Florida. That last one was a particular stroke of genius on the part of the band director, because it was February and we were in Yellowknife, meaning the people we were selling to hadn’t seen fresh fruit in six months. It was also a logistical nightmare, as we had to deliver by car (flats of oranges are heavy) during blizzards, hoping to catch people at home before the fruit expired. 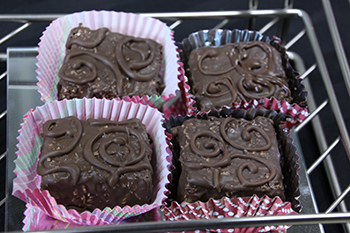 I wasn’t involved, but the same junior high shipped in Big Macs from the closest town with a McDonalds (Edmonton, if you want to Google map it). They arrived frozen, but that didn’t stop people from buying them by the dozen. Which was good for the team, but grosses me out to this day.

And then, of course, there were the countless bake sales I had to make cookies for but couldn’t actually eat at, due to allergies. I’m sure I was conscripted into more of these things, but I think I’ve blocked them out…

This is why I bought the haddock, and it’s why, whenever small terrified humans ring my doorbell, I give them money (often without taking whatever they’re selling, due to the aforementioned allergies). It’s not because I know school budgets have been slashed to the bone (which they have) and that they need the money to function (which they do), it’s because I remember just what it was like to be in those kids’ quaking boots.

How do you feel about school fundraisers? What’s the weirdest thing you or your kids have ever been asked to sell for your school?

Filed to: Life, the Universe, and Everything
Tagged with: allergies, childhood trauma, school fundraisers

2 Comments on ‘The Lingering Trauma of the School Fundraiser’