So Apparently Storm Chips are a Thing 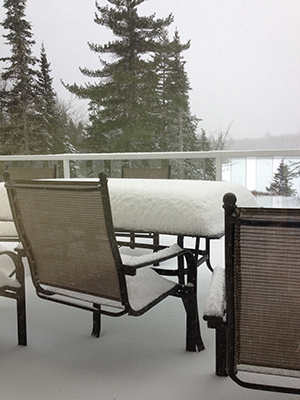 I grew up in Alberta and spent several formative years in Yellowknife, NWT. In Alberta, cities don’t bother plowing residential streets until the ruts are so deep you risk high-centering in the compacted snow, ice, and gravel* between them. In Yellowknife, you can be in the midst of a three-day-blizzard and the schools will still be open, because kids need somewhere safe to go if their home pipes burst or their furnaces die.

I’d never even heard of a “snow day” until moving to Nova Scotia, where they’re a startlingly frequent occurrence. I still haven’t figured out the criteria for calling them, because they occasionally fall on bright sunny days after the snow is over, but I’ve been here long enough now to embrace them when they come my way. They’re not holidays for me, just venue changes, but at least on snow days, I can work in my PJs. 😀

This week, when I’ve stayed home twice due for weather reasons, a new twist on the snow day phenomenon has come to my attention: storm chips.

Apparently, potato chips are the official food of snow days, because everyone at work was talking about picking up their storm chips (or storm chip induced comas, on the days we made it in). It struck me as so bizarre, I started Googling, and discovered that (yet again) I’m seriously behind the curve here, because storm chips have been a thing since January 2014, when CBC Radio host Stephanie Domet commented on air that her entire pre-storm grocery list consisted of chips and dip.

There’s even a hashtag: #stormchips

Here are some of the other articles I found on the storm chip phenomenon:

How #stormchips Became a Maritime Phenomenon

Did You Pick Up Your #stormchips?

Are there snow days where you live? What’s your favourite snowed-in snack?

* Road salt doesn’t work that far below zero, so crews spread traction sand instead – effective, but messy, especially since they have to scrape it back off the roads in spring.

Filed to: Life, the Universe, and Everything
Tagged with: #stormchips, snow days, Stephanie Domet

2 Comments on ‘So Apparently Storm Chips are a Thing’