New Evidence That Rats and Unicorns Are Not Related

Researchers at the University of Minnesota have just proved that rats feel regret.

They placed four rats in a maze, where different spokes led to differently flavoured treats; at each spoke, a tone sounded to let the rats know how long they’d have to wait to receive the food. Rats had to balance the wait time against the chance of finding a food they preferred somewhere else in the maze.

Neurotransmitters in the rat’s brains showed that, not only did each rat have a distinct and unique preference for chocolate, cherry, or banana flavoured rat kibbles, but each rat made different choices when it came to wait times. And after making a choice, the rats thought about different choices they could have made instead. Then they adapted their behaviour in future choices, showing that they learned from past disappointments. 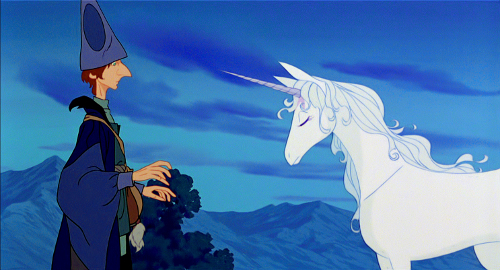 This is yet more proof (if any were needed) that rats and unicorns are not related. After all, as anyone who’s seen or read Peter S. Beagle’s The Last Unicorn knows, unicorns can never regret.

Unlike me. I just discovered that Beagle and The Last Unicorn were touring Canada and stopped in Halifax – back in MAY – causing me to feel some fairly epic regret over having missed the opportunity to meet one of my writing idols.

Hmmm…. not sure I’m liking the implications about my relationships with both rats and unicorns at this point!

Have you ever read or watched The Last Unicorn? (If not, go do it right now – no, really.) If you’ve done both, which do you prefer? And if you’re in a sharing mood, what’s a recent decision you regret?

Filed to: Life, the Universe, and Everything
Tagged with: neurobiology, Peter S. Beagle, rats, The Last Unicorn