Fuzzy Forensics Has a Cover!

And it’s so pretty! 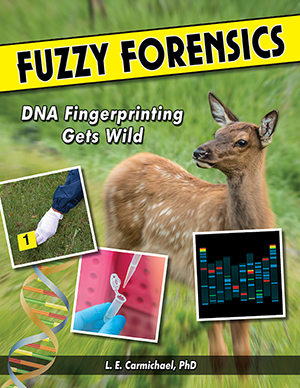 This is the work of Michael Penman, who also designed Fox Talk. I can’t recommend him highly enough – he’s not only talented, but a pleasure to work with.

My contribution was locating just the right images to capture the essence of the book. The sciencey bits were easy (except for the DNA strand, to which many artists have applied a great deal of artistic license). Finding the perfect shot of a baby elk, however, resulted in hair pulling and strong language. The problem is that images in stock databases are often cataloged by a species’ common name, instead of the scientific name. And in different parts of the world, the same animal is known by different names.

As a result, about half of the adorable elk photos I sifted through were actually moose. And if they were elk, the vegetation in the background was the same colour as their fur, making it really tricky to distinguish any details. Hence the hair pulling. But hey, every child suffers some growing pains, and the end result is always worth it. Because look at the pretty! 🙂

Filed to: Life, the Universe, and Everything
Tagged with: book cover, elk, Michael Penman, L. E. Carmichael, Fuzzy Forensics, moose, ages 12 and up