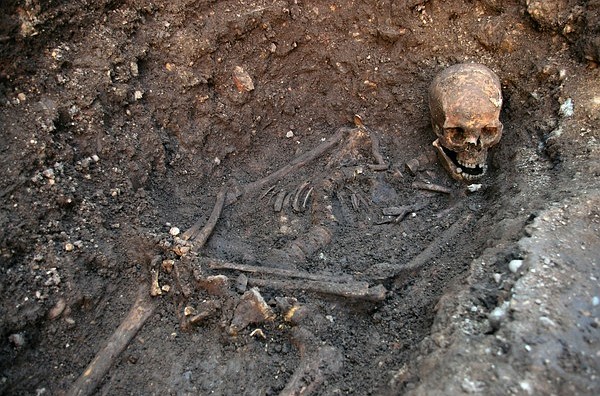 Photo courtesy of the University of Leicester

Instead of Romeo and Juliet, my 10th grade English teacher made us read Shakespeare’s Richard III. These days about all I remember is “A horse, a horse, my kingdom for a horse,” and that creepy Elizabethan belief that wicked souls could be detected by the physical deformity that housed them.

I’m glad our culture has (more or less) gotten over that last bit of nonsense.

Like many people, I was totally fascinated when archaeologists discovered the King’s body last year, in large part because his scoliosis is dramatically visible in his skeleton. A thoracic curve that extreme was probably quite painful at his age, and might even have caused breathing and heart problems. No wonder the man was a tad on the cranky side – chronic pain will do that to the best of us.

Now scientists have announced their intention to sequence Richard’s genome, to learn more about his health and ancestry.  He’ll be the first historical individual of known identity whose DNA has been studied to this extent. The project will be challenging, because ancient DNA tends to be fragmented or degraded. At the same time, it’s astonishing that genetic technology has come so far in the 13 years since the Human Genome Project wrapped up (a project that itself took 13 years).

What are your thoughts on this story? If you could dig into the DNA of any historical figure, who would it be, and why?

Interested in more information on scoliosis or the Human Genome Project? Check out my teen books Living With Scoliosis and Gene Therapy.