Amy’s Marathon of Books: Half Brother, by Kenneth Oppel 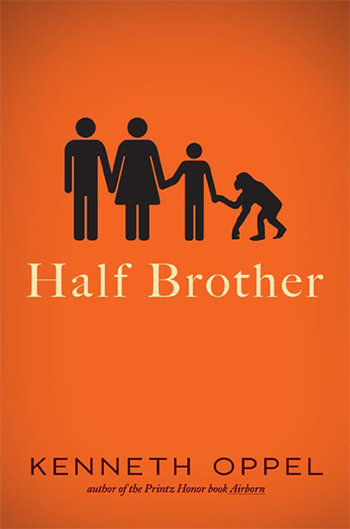 Title: Half Brother
Author: Kenneth Oppel
Publisher: HarperCollins
ISBN: 9781554688128
Book source: review copy from publisher that’s been sitting on my shelf since I worked for Chapters in 2010*

When Ben Tomlin’s mother brings home his “new baby brother,” an eight-day-old chimpanzee, Ben is far from thrilled. His father, a renowned behavioural scientist, has uprooted the family and moved them halfway across the country, to Victoria, B.C., so he can pursue a high-profile experiment — to determine whether chimpanzees can learn human sign language.

The chimp, named Zan, must be raised exactly like a human. He’s dressed in clothes and fed in a high chair and has a room full of toys. Ben is soon smitten. Joining the team of students who are helping with the experiment, Ben becomes both researcher and adored older brother.

Within months, Zan learns his first signs and becomes a media sensation. At his new school, Ben’s life seems similarly charmed as he vies for the attention of the beautiful Jennifer — using his newly acquired scientific observational skills.

But when Project Zan unexpectedly loses its funding, Ben’s father is under huge pressure to either make the experiment succeed or abandon it — and Zan. Unable to convince his father that Zan is now part of the family, Ben must risk everything he knows and everyone he loves in order to save his baby brother.

Half Brother deals with a lot of the same questions that came up while I was researching Fox Talk. What are the most ethical ways to study and learn from animals? What responsibilities do scientists have towards the animals they include in their experiments? In the not-so-distant past (read = the time this book is set), conventional scientific wisdom held that animals were creatures of instinct without consciousness or feelings, and these issues weren’t issues at all. Now that we know better, how do we balance the rights and needs of the animal with the need to expand human knowledge?

While Half Brother explores these serious issues in some detail, the problem never gets in the way of the plot. First and foremost, this is a story about family, in all its forms. It’s about a teenage boy facing all the regular teenage problems, complicated by a sibling other people don’t understand. I especially loved Oppel’s deft handling of Ben’s feelings towards Zan – the change from resentment to acceptance to devotion is smooth and believable.

Required reading for budding scientists and animal lovers of all ages.

Half Brother is my second stop for Amy’s Marathon of Books, which is bringing awareness to the range of wonderful teen

books written by Canadians, AND raising money to launch a new teen book award. For more info, visit Amy’s website. And click the button to donate!

What are some of your favourite animal books? Share in the comments!

* Which is not to say I didn’t want to read it. I LOVED Oppel’s Silverwing series after all. This is just a symptom of how totally out of control my TBR pile has become.

Filed to: Life, the Universe, and Everything
Tagged with: Amy's Marathon of Books, Kenneth Oppel, Half Brother