The Beaver Always Gives a Dam

I live on a forested lot on the edge of a  wetland, and a few days back, Tech Support ran into my office in full-on muppet flail shouting, “There’s a beaver swimming up the creek!”

So we put our rubber boots on and went out to look for it. Unfortunately the wily rodent eluded us (maybe he had a paddle), but we had a good time tromping about the bushes looking for him all the same – and checking for new dams.

Beavers are ecosystem engineers – a species that builds or dramatically modifies existing habitat. While humans may not always appreciate beavers’ efforts, dam construction serves a lot of useful functions in the wild, including sediment deposition, reduced erosion, and creation of habitat for lots of other species. 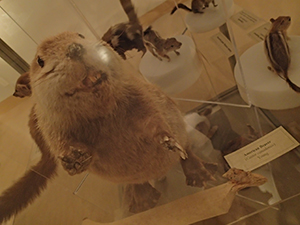 Um… “American” beaver? I’m pretty sure canadensis is a little north of there…

Beavers are also a huge part of Canada’s national identity. Historically, fur trapping was a major incentive for exploration, and beavers built the Hudson’s Bay Company. Trapping records show annual catches of over 100,000 animals, and they are still harvested for fur today. When I visited North American Fur Auctions to collect wolf samples during graduate school, I was amazed to see that beaver pelts are almost perfectly round – you’d never recognize them if you didn’t know what they were.

Beavers are also the source of castor oil, which used to be considered medicinal, and is still used in the perfume industry.

I prefer my beavers alive, however, and I love the idea that Canada’s national animal is living in my personal  wetland. Although I will be keeping an eye on the level of the creek, as it passes rather near the foundation of my house… And if I happen to catch a glimpse of the dam builder, I will sing him the Arrogant Worms song, We Are the Beaver, which you can listen to for free, and should, because of all the awesome.

What animals wander past your house? Which are you happy to see and which would you rather found someplace else to live?

2 Comments on ‘The Beaver Always Gives a Dam’